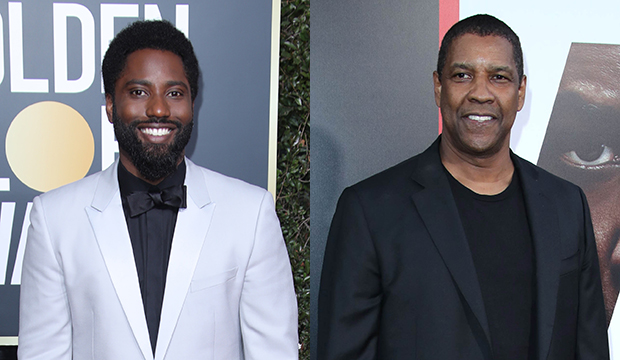 “BlacKkKlansman” star John David Washington is trying to follow in dad Denzel‘s footsteps and make them the second father-son duo to receive acting Oscar nominations after Kirk and Michael Douglas. If the younger Washington does make the Best Actor shortlist, he’ll definitely prove to be his father’s kid, because he’ll have done so with the same major precursor nominations his dad had last year.

John David, who inherited his pops’ voice in addition to his acting skills, earned Golden Globe and Screen Actors Guild Awards nominations for his performance as Detective Ron Stallworth, but he was skipped over at Critics’ Choice and BAFTA. Denzel only had Globe and SAG bids under his belt last year en route to an Oscar nomination for “Roman J. Israel, Esq.” That was actually the second time Denzel made the Oscar five with that combo since BAFTA became a precursor 18 years ago; he won the Best Actor Oscar for “Training Day” (2001) with just Globe and SAG nominations. Back then, Critics’ Choice only had three nominees, so he probably would’ve been part of a standard five-nominee list. Both father and son failed to make the Critics’ Choice cut last year and this year in fields of seven, so it really does run in the family.

Meanwhile, BAFTA must have some beef with the Washington clan. Denzel has never received a BAFTA nomination despite eight acting Oscar nominations and two wins, and that BAFTA luck has now extended to the next generation. John David’s snub is all the more notable since “BlacKkKlansman” received five nominations, including for Best Picture and Best Director for Spike Lee, who, lest we forget, directed Denzel to his first Best Actor Oscar nomination for “Malcolm X” (1992). Many of Denzel’s Oscar contenders, on the other hand, have underperformed at BAFTA in general; “Fences” (2016), for instance, only received one nomination (and win) for Viola Davis.

John David is currently in the dangerous fifth spot in our odds, behind Bradley Cooper (“A Star Is Born”), Christian Bale (“Vice”), Rami Malek (“Bohemian Rhapsody”) and Viggo Mortensen (“Green Book”), all of whom hit Globe, Critics’ Choice, SAG and BAFTA. If he gets knocked out, it could be at the hands of critical favorite Ethan Hawke (“First Reformed”), who’s in sixth place, aka his dad’s “Training Day” co-star. Everything comes full circle.