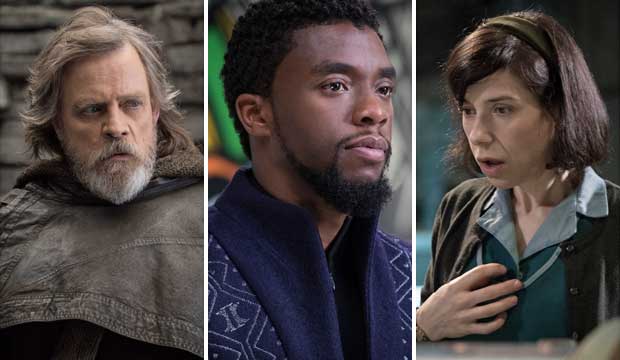 Composer John Williams has won 24 Grammys over the course of his career for scores ranging from “Raiders of the Lost Ark,” to “Schindler’s List,” to “Memoirs of a Geisha.” That places him seventh among the most awarded artists in history. He could climb further up the ranks this year for his work on “Star Wars” scores. Will the 86-year-old legend prevail again?

Williams has been nominated 69 times overall and contends twice this year: Best Visual Media Score (“Star Wars: The Last Jedi”) and Best Instrumental Composition (“Mine Mission” from “Solo: A Star Wars Story”). Recent history is on his side. He has won 6 times in the last 11 years, and “Star Wars” in particular has been a good luck charm for him. He previously won for composing the original film (1978), “The Empire Strikes Back” (1981) and “Star Wars: The Force Awakens” (2017).

If he wins one of his nominations this year, that will bring him to a grand total of 25, which would tie him with classical pianist Vladimir Horowitz and R&B star Stevie Wonder for sixth place on the all-time list. And if he wins both prizes he’ll match conductor Pierre Boulez for fourth place with 26 total trophies. But he’d still be a handful short of the all-time record of 31 wins accumulated by conductor Georg Solti.

While Williams is a Grammy juggernaut, though, he’s not unbeatable. This year he may be especially vulnerable to Alexandre Desplat, who is nominated three times for “The Shape of Water“: Best Visual Media Score, Best Instrumental Composition and Best Arrangement. He’s already an Oscar winner for his work on Guillermo Del Toro‘s romantic fairy tale. And the last movie he won an Oscar for (“The Grand Budapest Hotel”) won him a Grammy too.

Williams and Desplat are the only nominees for Visual Media Score who were also nominated at last year’s Oscars, but they compete against two other awards contenders from last year’s derby: Benjamin Wallfisch and Hans Zimmer for “Blade Runner 2049” and Michael Giacchino for “Coco.” Zimmer has won four Grammys over the years and Giacchino has won three, so we mustn’t rule them out.

SEE‘Black Panther’ at the Oscars: Who should be nominated for Best Supporting Actor?

And because the Grammys have a unique eligibility period (October 1, 2017 to September 30, 2018) there is one Grammy nominee from the current Oscar cycle: “Black Panther” by Ludwig Goransson. He hasn’t won any Grammys yet, but he could be a sleeping giant this year. The “Black Panther” soundtrack is nominated for Album of the Year — that compilation isn’t the score album Goransson is up for, but goodwill for the film and its music as a whole could spill over here.

Goransson is additionally nominated for his work with Childish Gambino: Record of the Year and Song of the Year for “This is America,” plus Best R&B Song for “Feels Like Summer,” so voters may be especially enthusiastic about checking off his name. Perhaps “The Last Jedi” has met his match against the king of Wakanda.