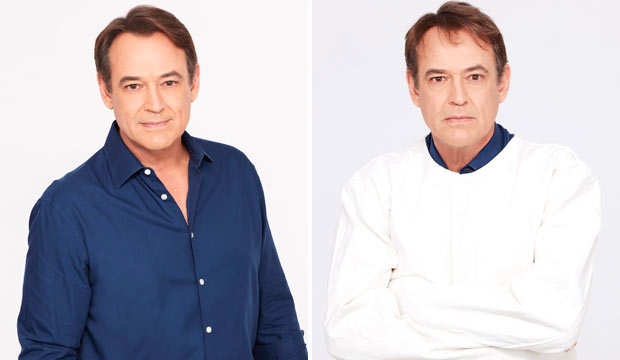 Jon Lindstrom is a decades-long veteran of soaps with roles spanning “General Hospital,” “Port Charles” and “As the World Turns.” But his Best Actor nomination this year at the Daytime Emmys is only the second of his career. He’s up for his best known role — or actually, roles — as Kevin Collins and his twin brother Ryan Chamberlain on “GH.” So will these awards be a two-for-one deal for the television academy?

These awards are decided by blue ribbon panels judging sample performance reels from every actor, so what did Lindstrom submit to earn this nomination? And was it good enough to win? Find out all about it below in our analysis.

Synopsis: The reel opens with psychiatrist Kevin Collins counselling his patient Franco (Roger Howarth), who is struggling with abuse he experience as a child. Kevin recounts he and his brother Ryan were also abused by their mother. We then see Kevin going to a psychiatric facility to bring a heavily medicated Ryan back to a lucid state.

Ryan was a killer and stalker who was presumed dead in an explosion, but Kevin found him and kept him hidden and sedated in a padded cell. Kevin still thinks there’s hope for Ryan to be redeemed if he can address the abuse of their childhood, but Ryan resents being held prisoner. He attacks Kevin and switches their clothing, leaving Kevin in a straitjacket and Ryan free to assume Kevin’s life in Port Charles. Kevin tries to convince the psychiatric nurse that he is who he says he is, but the nurse drugs him instead under “Kevin’s” orders.

Roles are reversed in the next scene with Ryan visiting Kevin in the psych facility. Kevin is horrified that Ryan has already killed twice since he has been free from captivity, and he’ll kill Kevin’s wife Laura (Genie Francis) next if Kevin doesn’t agree to help him. In the last scene Ryan, still pretending to be Kevin, is questioned by Laura about his strange behavior. Ryan stabs Laura in the stomach, but it’s only a dream sequence.

Pros: This storyline could be confusing, especially out of context, but Lindstrom differentiates the two characters’ personalities so well that his scenes opposite himself are easy to follow. Emmy voters often love actors who assume multiple roles, like five-time Best Actor champ David Canary (“All My Children”), who also played drastically different twins. Dual roles give actors the opportunity to show off their dramatic range by essentially giving two performances for the price of one, and you can’t get more different than the benevolent Kevin and the psychopathic Ryan.

Cons: Emmy voters also tend to like showy performances, and Lindstrom is understated for most of this reel, even when he’s evil. That could hurt him against rivals with bigger, flashier performances. And while he may get a boost from voters who think he’s overdue for a win, the fact that this is his first ever nomination as Kevin and Ryan (his previous nom was for “ATWT”) could suggest that voters just don’t respond as strongly to these characters.