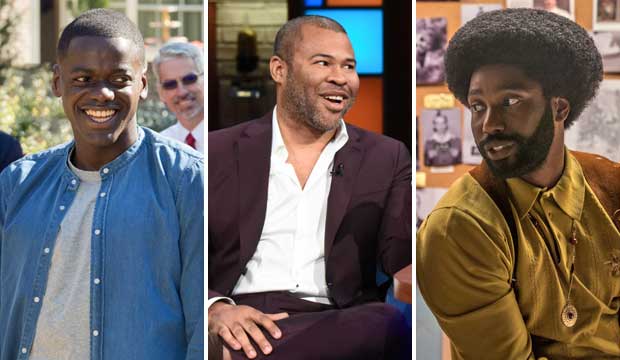 Before Oscar nominations I speculated about whether Jordan Peele could pull a Ben Affleck by winning an Oscar for writing (Best Original Screenplay for “Get Out,” 2017) and then one for Best Picture (“BlacKkKlansman”). But Peele made history just by being nominated this year. He now has more Best Picture nominations than any other black producer in history.

When Peele was nominated for Best Picture, Best Director and Best Original Screenplay for “Get Out” last year he was the first black filmmaker ever to be nominated in those three fields in a single year. Now he’s back in the running as one of the producers of Spike Lee‘s “Klansman.” That brings the total of black nominees for Best Picture to 11, but Peele is the only repeat contender.

The full list of nominated black producers is as follows:

Almost all of those nominations have come in the last 10 years. Jones’s 1985 bid for “The Color Purple” was the only one in history for a black producer when there were only five nomination slots for Best Picture. And the victory for “12 Years a Slave” made McQueen the first (and to date only) black winner in the category; he shared that victory with his fellow producers Brad Pitt, Dede Gardner, Jeremy Kleiner and Anthony Katagas.

“BlacKkKlansman” is also the only film in Oscar history with two black producers credited as nominees. But can it win? According to the combined predictions of thousands of Gold Derby users, it ranks second for Best Picture with 6/1 odds, trailing the front-runner “Roma.” So don’t count it out. Peele and Lee have a real chance for a historic infiltration of the Oscars.

'The Falcon and The Winter Soldier's' surprise cameo, explained