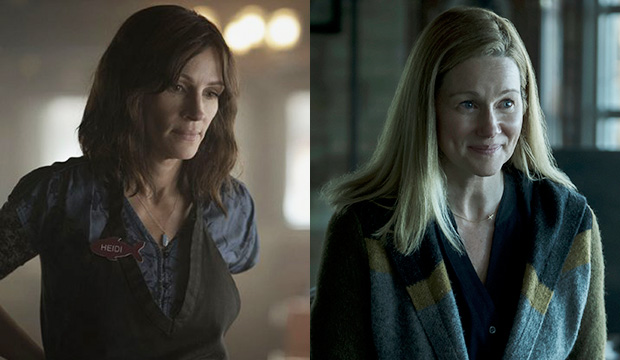 Eighteen years ago, Julia Roberts took home the Best Actress Oscar for “Erin Brockovich” (2000). Among the people she beat? Laura Linney, who earned her first nomination with “You Can Count on Me.” And now, a full person-who-can-vote years later, the two are poised to face off again at the Emmys for Best Drama Actress.

Roberts is competing with her Amazon series “Homecoming” and Linney is Netflix’s hopeful for “Ozark.” In our early odds, both are predicted to make the lineup, with Linney in second place and Roberts in third.

Roberts may have gotten the better of Linney at the Oscars — ain’t nobody was hijacking Roberts’ coronation that year — but it’s a totally different ballgame at the Emmys. That’s because Laura Linney is a goddamn Emmy queen. She possesses a nearly perfect 4/5 record; she has three Best Limited Series/TV Movie Actress statuettes (“Wild Iris,” 2002; “John Adams,” 2008; “The Big C: Hereafter,” 2013) and one for Best Comedy Guest Actress (“Frasier,” 2004). Her lone loss was on her fourth nomination, in Best Comedy Actress for “The Big C” in 2011, when she fell to Melissa McCarthy (“Mike & Molly”). So, yeah, Emmy voters like her, they really like her.

SEE ‘Homecoming’ and going: Julia Roberts is out, but who will replace her in Season 2?

Meanwhile, Roberts’ A-list star wattage hasn’t helped her get over the line at the Emmys. She’s lost both of her bids so far: Best Drama Guest Actress for “Law & Order” in 1999 to Debra Monk (“NYPD Blue”) and Best Limited Series/TV Movie Supporting Actress for “The Normal Heart” in 2014 to Kathy Bates (“American Horror Story: Coven”). Coincidentally, that latter race was a double Oscar rematch for Roberts; Bates won the Best Actress Oscar for “Misery” (1990) over Roberts (“Pretty Woman”), and one of Roberts’ other Oscar rivals during her winning season was Ellen Burstyn (“Requiem for a Dream”), who was Emmy-nominated that year for “Flowers in the Attic.”

Beyond their personal Emmy records, Linney is better positioned than Roberts in general since the industry is obsessed with “Ozark.” The industry response to “Homecoming” has been muted on the other hand; it only got four guild nominations total, while “Ozark” received four Screen Actors Guild Awards nominations alone this year, with a win for Jason Bateman. Linney didn’t make the Emmy cut last year in that stacked Best Drama Actress lineup, but “Ozark” managed two directing bids and an acting one for Bateman. In other words, Linney could very well avenge her Oscar loss to Roberts at the Emmys.

But she will have to get by Sandra Oh (“Killing Eve”), who leads our predictions. Jodie Comer (“Killing Eve”), Robin Wright (“House of Cards”) and Emilia Clarke (“Game of Thrones”) round out the top six.