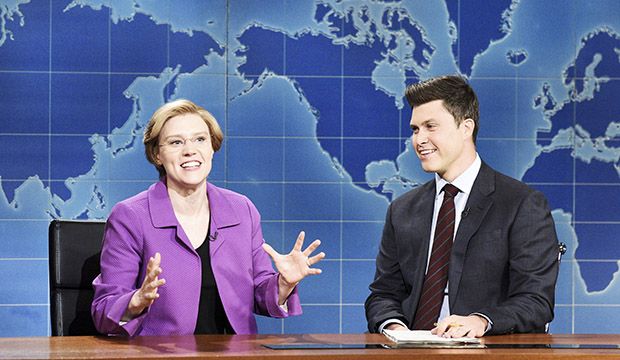 Last year, Kate McKinnon‘s Emmy three-peat was derailed by Alex Borstein (“The Marvelous Mrs. Maisel”), who took home the Best Comedy Supporting Actress statuette. After “The Marvelous Mrs. Maisel” made killing at the guilds earlier this year, including sweeping the comedy prizes at the Screen Actors Guild Awards, Borstein looks solid to repeat and in fact tops our odds. But two of our Experts feel she is entirely beatable — by none other than McKinnon herself.

Thelma Adams (Gold Derby) and Anne Thompson (IndieWire) are picking the “Saturday Night Live” star to reclaim her crown. McKinnon is in second place in our odds, at 9/2 to Borstein’s 71/20.

This would be a minor upset — as minor as you can get with a two-time winner. “SNL” is no longer riding the heat of the lead-up and immediate aftermath of the presidential election, which no doubt carried McKinnon to her victories in 2016 and ’17. And McKinnon, while always fabulous and game, didn’t have a ton of great and memorable material this season. Plus, “Maisel” was the Emmy darling last year, taking home eight awards.

But the X factor in all this may be if McKinnon leaves “SNL.” Her contract is up and there’s no word yet if she’ll depart ahead of the 45th season, or even during it, or if she’s sticking around. But if news comes over the summer — aka during Emmy voting — that McKinnon, who’s been on the show since 2012, is leaving, this could lead to a farewell Emmy hug for one of “SNL”‘s brightest stars and arguably the defining talent of this generation’s cast.

A third Emmy in the category would also tie McKinnon with Valerie Harper (“The Mary Tyler Moore Show”) and Laurie Metcalf (“Roseanne”). The record of four is held by Rhea Perlman (“Cheers”) and Doris Roberts (“Everybody Loves Raymond”).