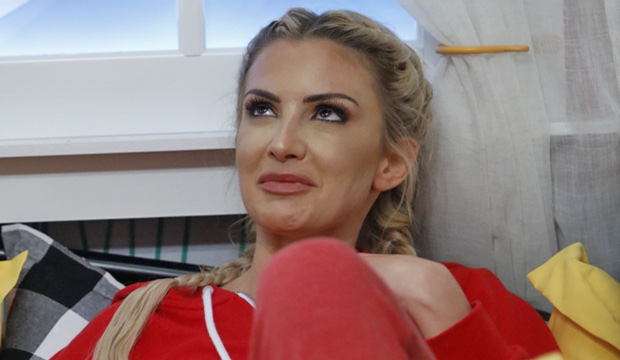 At the end of Wednesday’s episode of “Big Brother,” Kathryn Dunn seemed to be having second thoughts about volunteering to go up as a pawn against target Sam Smith. After all, pawns go home all of the time on CBS’s reality TV show. “These bitches are conspiring against me!” Kat joked in the Diary Room after Veto winner Nick Maccarone removed himself from the block and Head of Household Holly Allen put her up as a replacement nominee. Who do YOU think is going home on Thursday night: Kat or Sam? Be sure to update your “Big Brother” predictions right now.

Kat continued on, “I volunteered to go up on the block as a pawn, which could be a very genius plan or a bad plan that sends me home. Yeah, I don’t really know what I got myself into, to be honest.” As of this stage Kat looks to be safe heading into the live eviction, as she has the backing of the dominant Six Shooters alliance: Holly, Analyse Talavera, Christie Murphy, Jack Matthews, Jackson Michie and Tommy Bracco. But things can change on a dime inside the “BB21” house.

With Nick no longer on the block, a “pretty disappointed” Sam now believes himself to be the target who’s most likely to be interviewed by Julie Chen Moonves this week. However, he’s holding out hope for a blindside. “I need to make sure I campaign hardcore with all the other houseguests,” he noted in the Diary Room after the Veto meeting. “I will plant some seeds of doubt in Kat’s ear and try to make her spiral out of control, and maybe she’ll become a bigger target than me. So it’s go time.”

SEE‘Big Brother 21’ spoilers: There could be fireworks at Thursday’s eviction, which may be our only source of fun this week

As for why Holly put up Kat as a pawn instead of nominating a bigger threat like bird-fearing Nicole Anthony, the HOH explained, “Even though I am a bit wary of a few things going on within our alliance” — i.e. Analyse spreading rumors — “it is way too soon to cause a big rift in Six Shooters, so I went ahead and stuck with the original plan and put Kat up. I feel like she’s a pretty safe pawn and Sam should be leaving this week.”

If things go according to plan then Sam will be having some one-on-one time with Julie on Thursday night. Of course, Kat is right to worry about her status as a pawn because this is “Big Brother,” after all! As Julie always says, expect the unexpected.