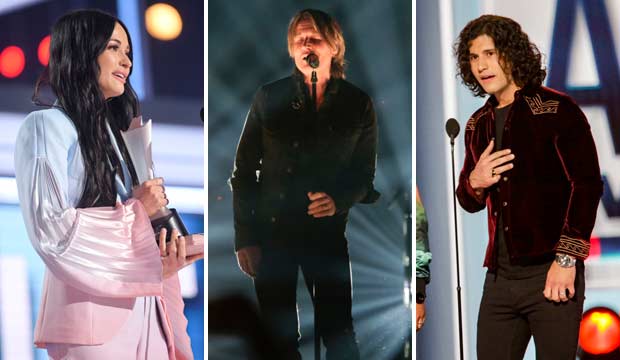 The 2019 Academy of Country Music Awards ended in an upset on Sunday night: Keith Urban won Entertainer of the Year over three-time defending champion Jason Aldean. Perhaps surprisingly, it was the first time Urban ever won that award despite eight previous nominations. But he wasn’t the biggest winner of the night. That distinction went to Kacey Musgraves and the duo Dan and Shay. Check out the complete list of winners here.

Meanwhile, Musgraves won three out of her five nominations. She claimed Female Artist of the Year for the first time, ending Miranda Lambert‘s historic nine-year winning streak. She also won Album of the Year for “Golden Hour,” for which she was honored twice as artist and producer. This completes her clean sweep of CMA, Grammy and ACM Awards for Album of the Year. No one had won that trifecta since Taylor Swift‘s “Fearless” a decade ago.

Everyone else took home one award apiece. Old Dominion were the repeat winners for Group of the Year. Chris Janson claimed Music Video of the Year for “Drunk Girl.” Dierks Bentley and Brothers Osborne shared Musical Event of the Year for their collaboration “Burning Man.” And Thomas Rhett upset the aforementioned Stapleton for Male Artist of the Year; Rhett has now won that prize twice in the last three years.

Unfortunately, that meant a complete shutout for Stapleton, who left empty-handed despite his six nominations. What did you think of the winners? Discuss this and more with your fellow music fans in our forums.