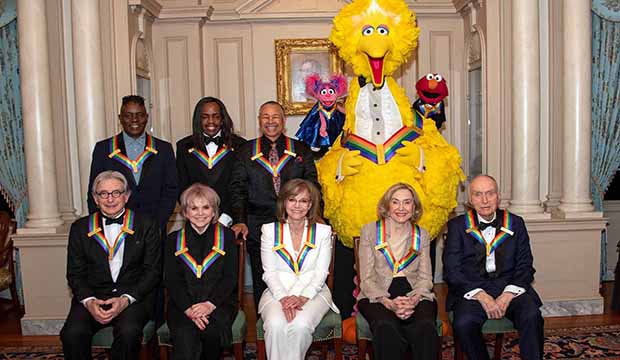 Five more artists were added to the four-decade tradition of Kennedy Center Honors in Washington, D.C. on Sunday. The 42nd annual program, which will air December 15 on CBS, was hosted by previous recipient LL Cool J. We’ve got the complete list of performers for the 2019 KCH ceremony, which featured tributes to Earth, Wind and Fire, Sally Field, Linda Ronstadt, “Sesame Street” and Michael Tilson Thomas.

SEEKennedy Center Honors: 50 Entertainers Who Deserve To Be Selected

Ronstadt is one of the top vocalists of the past five decades and is a member of the Rock and Roll Hall of Fame. She has sold over 50 millions albums, had 31 gold and platinum records and has won 10 Grammy Awards. Her tribute featured Don Henley, Kevin Kline, Emmylou Harris, Carrie Underwood (“Blue Bayou,” “When Will I Be Loved?”), Aaron Neville and Trisha Yearwood (“Don’t Know Much,” “You’re No Good”) and Flor de Toloache.

Field is a two-time Oscar winning actress for “Norma Rae” and “Places in the Heart.” She was also nominated for “Lincoln.” She is an Emmy winner and Tony Awards nominee plus more awards. Her tribute featured Tom Hanks, Steven Spielberg, Pierce Brosnan and Maura Tierney.

“Sesame Street” debuted 50 years ago in 1969 on PBS and became the most influential children’s program of all time. Co-founders Joan Ganz Cooney and Dr. Lloyd Morrisett accepted the award on behalf of the show. This tribute featured Ernie and Bert, Big Bird, Cookie Monster, Joseph Gordon-Levitt, Cedric the Entertainer and a performance of “Sing a Song.”

Thomas is Music Director of the San Francisco Symphony and co-founder of the New World Symphony. He is an 11-time Grammy Award winner. His tribute featured Lars Ulrich, Debra Winger, Audra McDonald, Yuja Wang and the New World Symphony Alumni Orchestra (“Hoedown,” “I Got Rhythm,” “Where Has the Time Gone,” “There’s a Place for Us”).

Earth, Wind and Fire has been performing for five decades and is a member of the Rock and Roll Hall of Fame. Members Philip Bailey, Verdine White and Ralph Johnson represented the group at the ceremony. Their tribute featured David Foster, John Legend (“Can’t Hide Love”), Cynthia Erivo (“Fantasy,” “Reasons”), Ne-Yo (“Shining Star”), Jonas Brothers (“Boogie Wonderland”) and David Copperfield. The final performance was of their song “September.”