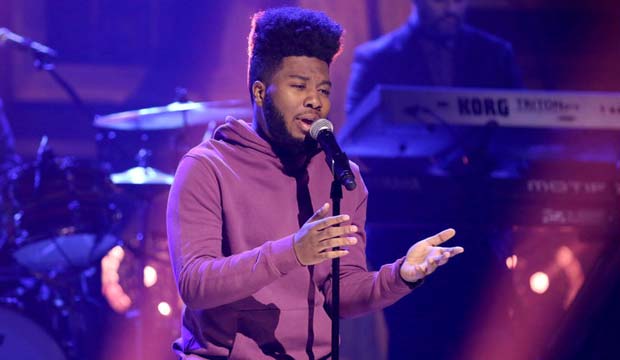 As the 2019 Academy of Country Music Awards quickly approach — they’re coming up on Sunday night, April 7 — CBS has announced which music stars will be taking the stage together for special collaborations, and the list includes a star from outside the world of country music: Grammy-nominated R&B breakout Khalid.

Khalid is already known for a few hit collaborations, like “1-800-273-8255” with Logic and Alessia Cara, and “Love Lies” with Normani. But at the ACMs he’ll be joining forces with Kane Brown, with whom Khalid recorded a remix of his song “Saturday Night.” Brown is nominated for Single of the Year for “Heaven” at this year’s awards; it’s his fourth nomination, but he has yet to win.

Khalid isn’t the only artist genre-hopping for a special ACMs duet. Previously announced Americana singer Brandi Carlile is taking the stage with Dierks Bentley. Pop star Kelly Clarkson will perform alongside Jason Aldean and Dan and Shay; Clarkson is nominated for Musical Event of the Year with Dan and Shay for their collaboration “Keeping Score.” Additional team-ups during the telecast will include Eric Church and Ashley McBryde, Maren Morris and Brothers Osborne, and Florida Georgia Line and Aldean.

There will also be “ACM Flashbacks” performances celebrating classic country hits. Miranda Lambert will join forces with the legendary George Strait on one such duet. And recent New Male Artist of the Year champ Luke Combs will perform with the veteran duo Brooks and Dunn.

Other performers already scheduled for the telecast include Reba McEntire, who is also hosting the awards for the 16th time, plus LANCO, Little Big Town, Thomas Rhett, Chris Stapleton and Carrie Underwood. Who are you most excited to see at the ACM Awards?