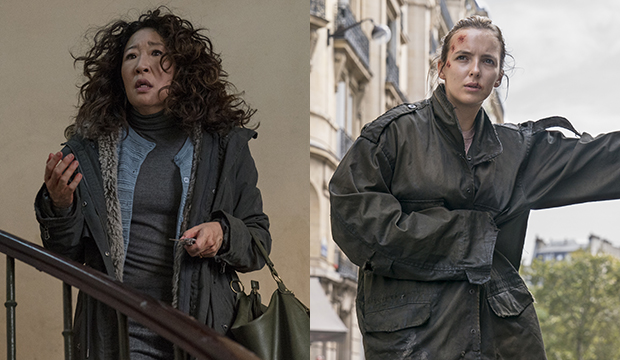 Can “Killing Eve” make a killing in the Best Drama Actress Emmy race? Our early odds have Sandra Oh and Jodie Comer making the cut, which would be the first time in 17 years one show has produced two nominees in the category.

“Six Feet Under” was the last show to do so, with Frances Conroy and Rachel Griffiths, who lost to Allison Janney (“The West Wing”). For the three years before that, “The Sopranos” stars Edie Falco and Lorraine Bracco competed against each other, with the former winning twice.

The ‘90s yielded co-star nominees in 1997 (“ER’s” Julianna Margulies and Sherry Stringfield) and 1994 (“Sisters’” Sela Ward, who won, and Swoosie Kurtz). But it was ’80s where co-star nominees ruled since there were far fewer shows back then compared to the 500 now. “Cagney & Lacey” (Tyne Daly and Sharon Gless) and “L.A. Law” (Susan Dey and Jill Eikenberry) dominated, but others included “Dallas” (Barbara Bel Geddes and Linda Gray), “Hill Street Blues” (Barbara Babcock and Veronica Hamel), “Family” (Kristy MacNichol and Sada Thompson) and “The Rockford Files” (Lauren Bacall and Mariette Hartley) after the category was standardized to five slots.

Last year, “Killing Eve” was only able to get Oh into the lineup, which made her the first actress of Asian descent to be nominated in the category. But as luck would have it, competition is very slim this year; Oh is the only eligible returning nominee, so there are plenty of open slots for Comer to slide in if the second season, which drops April 7, is as well received as the first.

After winning the Golden Globe, Critics’ Choice and Screen Actors Guild Awards, Oh ought to be safe to return, but she’s not the favorite to win; Olivia Colman has shot past her following her Best Actress Oscar upset for “The Favorite” on Sunday. However, this all depends on if “The Crown” is released within the eligibility period as Netflix has not announced a date yet.