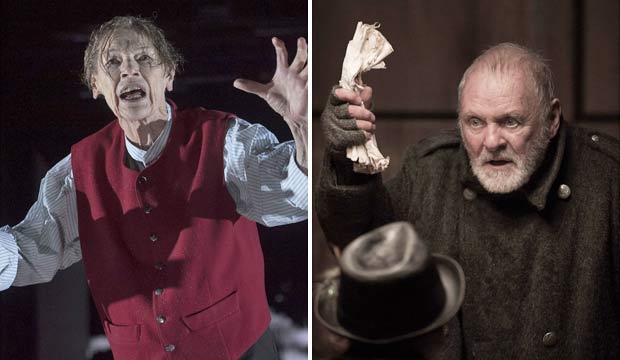 William Shakespeare is quite prolific for a playwright who has been dead for four centuries. His plays have been adapted many, many, many times. But 2019 is unique in that one of his most famous plays, the tragedy of “King Lear,” could win Tonys and Emmys in the very same year.

“King Lear” is the story of an aged monarch choosing how to divide his kingdom among his three daughters. It was made into a 2018 telefilm that cut the play down to about two hours and moved the action to 21st century London. It aired on BBC Two last May, but it streamed on Amazon in September, so it’s eligible to win Emmys later this year. As of this writing it ranks third in our predictions for Best TV Movie, and Anthony Hopkins is a strong contender to be nominated for the title role.

Not to be outdone, a new Broadway production of the play opened at the Cort Theater on April 4, and it has a gender-bending twist: the title role is played by Glenda Jackson, who is our current Tony Awards front-runner for Best Actress in a Play. Her co-star Jayne Houdyshell is a likely nominee for Best Featured Actress for taking on another traditionally male role, the Earl of Gloucester. And the show as a whole is predicted to be nominated for Best Play Revival.

But this isn’t the first time “King Lear” has been up for either award. The last Broadway revival of the tragedy was in 2004, and it was nominated for Best Play Revival and Best Actor in a Play (Christopher Plummer). Several actors have contended for Emmys for playing the title monarch as well: Laurence Olivier won Best Movie/Mini Actor in 1984, and Ian Holm (1999) and Ian McKellen (2009) later earned nominations. Alas, no actors have competed for Oscars as the ill-fated king, and no recordings of “King Lear” have been up for Grammys, so Shakespeare’s classic isn’t on track for its own special EGOT just yet.