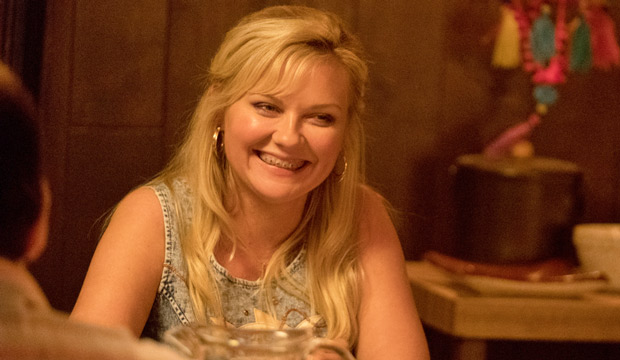 Perhaps no one in Hollywood is more overdue to win a Golden Globe than Kirsten Dunst. The versatile actress was first recognized by the Hollywood Foreign Press Association for “Interview with the Vampire” when she was just 12 years old. Dunst earned a bookend nomination 21 years later for the second season of “Fargo,” where she was heavily predicted to win until Lady Gaga‘s name was called for “American Horror Story: Hotel.” Can Dunst now receive her long-awaited Golden Globe thanks to “On Becoming a God in Central Florida”?

In Showtime’s quirky comedy series Dunst takes on the role of Krystal Stubbs, a housewife, mother and water park employee. Krystal’s husband Travis (Alexander Skarsgard) becomes embroiled in a pyramid scheme, Founders American Merchandise (aka FAM), a cult-like organization that demands loyalty of its hard-working members. After Krystal is dealt a personal blow, she tries to infiltrate FAM and its leader Obie Garbeau (Ted Levine) and take them down from the inside.

Dunst’s performance as Krystal is nothing short of transformative. Her braces sparkle every time she opens her mouth and speaks in that pitch-perfect Florida twang. The quirky-dark nature of the series allows Dunst to take on situations she’s never encountered yet in her career, including going mano-a-mano against an alligator, teaching a water aerobics class and effortlessly dancing with two life-sized dolls attached to her sides. Dunst is all in, and we love her for it.

If an “awards I.O.U.” actually exists, Dunst is one of the industry’s most valued recipients. Despite a lifetime in front of the camera, including in my all-time favorite film “Eternal Sunshine of the Spotlight Mind,” she has yet to win any letters of the EGOT. Dunst’s awards mantle is starting to fill up though, as she’s taken home a Critics’ Choice TV Award for “Fargo” and a Screen Actors Guild Award as part of the “Hidden Figures” (2016) ensemble.

Currently Dunst comes in third place to win Best TV Comedy Actress for “On Becoming a God in Central Florida,” according to our combined Golden Globe predictions. The two leading ladies she has to watch out for are Phoebe Waller-Bridge (“Fleabag”), who just dominated the Emmys, and Rachel Brosnahan (“The Marvelous Mrs. Maisel”), the Globes’ reigning two-time champ. Other potential nominees include Natasha Lyonne (“Russian Doll”), Julia Louis-Dreyfus (“Veep”), Hailee Steinfeld (“Dickinson”), Catherine O’Hara (“Schitt’s Creek”) and Kristen Bell (“The Good Place”).