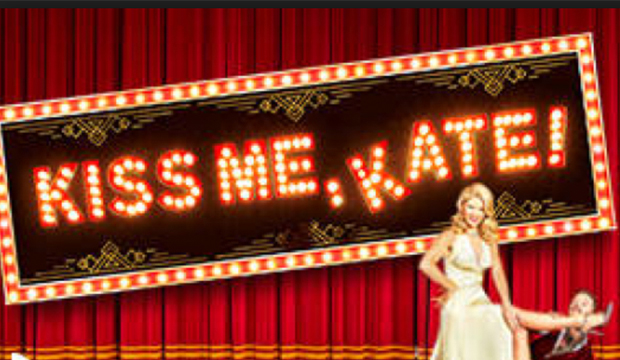 One of Cole Porter’s most popular shows, “Kiss Me, Kate,” hasn’t been seen on the boards of the Great White Way in nearly two decades. This season mark the return of the classic musical comedy via the Roundabout Theatre Company revival that opened on March 14 at Studio 54. Directed by Tony-nominee Scott Ellis, this staging stars Tony winner Kelli O’Hara (“The King and I”) and Tony nominee Will Chase (“The Mystery of Edwin Drood”) as the infamously divorced couple of sparring thespians Lilli Vanessi and Fred Graham.

Boasting popular Porter songs such as “Another Op’nin’, Another Show,” “Brush Up Your Shakespeare,” “So in Love,” “Too Darn Hot,” and “Wunderbar,” the musical follows Lilli and Fred as they reunite to star in a production of a musical version of Shakespeare’s “The Taming of the Shrew,” with their personal feelings influencing their on-stage performances. Notably, Tony nominee Amanda Green (“Hands on a Hard Body”) has tweaked and contributed additional material to recalibrate the gender dynamics of the show for the modern era.

Critics responded tamely to Ellis’s production of “Kiss Me, Kate.” In one of its most positive notices, Jesse Green (New York Times) labels the show a Critic’s Pick, calling this staging “so enjoyable,” and praising the performances of the “sublime” O’Hara and the “charmingly vain” Chase. Green doesn’t offer a full endorsement, though, noting that aside from standout moments such as O’Hara’s “So in Love,” which is “sung so gorgeously it almost melts the theater,” “too many other numbers disappoint.”

A little less favorably, Sara Holdren (Vulture) critiques the production for feeling “irretrievably dated” and coming off as a “handsome fossil,” though she does single out O’Hara’s “honey volcano of a voice,” featured actor Corbin Bleu’s “star turn” in Act II number “Bianca,” and choreographer Warren Carlyle’s “splashy golden-age choreography.”

DISCUSS The season with Broadway insiders in our notorious forums

Given the wide range of critical responses, some more harsh than Holdren’s, how might this “Kiss Me, Kate” fare with the Tony Awards? Historically, previous productions have performed very well. The original, which opened in 1948, was nominated for and won 5 Tonys including Best Musical, Author (Musical), Best Composer and Lyricist, Best Costume Design, and Producer (Musical). The 1999 revival starring Marin Mazzie and Brian Stokes Mitchell nabbed an astounding twelve Tony nominations, winning 5 for Best Revival, Best Direction, Best Actor for Mitchell, Best Costume Design, and Best Orchestrations.

This season’s mounting may fare well, though it seems likely to fall short of the most recent revivals nominations tally. With only one other musical revival opening this season (“Oklahoma”) and largely respectable reviews, “Kiss Me, Kate” seems assured a Best Revival nomination, barring any eligibility rulings from the Tony nominating committee. Of its possible nominations, a bid for Kelli O’Hara seems destined, with others for Tony-winning choreographer Carlyle (“After Midnight”) and Tony-winning orchestrator Larry Hochman (“The Book of Mormon”) relatively likely. In Featured Actress, Broadway newcomer Stephanie Styles could find herself batting a thousand come Tony nominations morning; David Cote (Observer) praises her as a “petite comic powerhouse” who could “join the lineage of [Bernadette] Peters, [Kristin] Chenoweth and [Annaleigh] Ashford.”