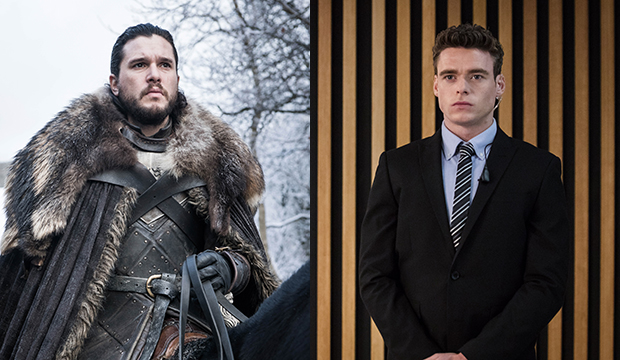 Kit Harington will be fighting for the Iron Throne as Jon Snow in the final season of “Game of Thrones.” But he could be in another game of thrones at the Emmys — against former “Game of Thrones” co-star Richard Madden, who will be contending for “Bodyguard.” Will one of them ascend to the Best Drama Actor throne? Let’s dive into the pros and cons:

– Having amassed 47 wins, including three Drama Series wins (2015-16, 2018), “Game of Thrones” is the most rewarded scripted series in Emmy history. Season 8 doesn’t even premiere until April 14, but its final season is expected to go over big with Emmy voters. Harington could benefit from a groundswell of support for the show and get checked off as part of a “Game of Thrones” steamroll. It helps that come voting, the show will still be fresh in voters’ minds.

– He nabbed a Best Drama Supporting Actor nom in 2016, alongside his co-star Peter Dinklage. A potential vote-split with Dinklage may have cost him the statuette, which ended up going to Ben Mendelsohn (“Bloodline”). Now that Harington is contending in the lead race, he’s in a co-star-free zone.

– Jon Snow is not only a fan-favorite character but has arguably become the face of the show. With Harington not having netted any hardware for the role yet, what better time to award him his inaugural statuette than on his final go-around?

– This isn’t Harington’s first attempt to break into the lead actor race. He and co-star Emilia Clarke moved from supporting to lead last year for the very first time but weren’t able to crack their respective lineups.

– With Dinklage being the only one of eight Emmy-nominated “Game of Thrones” actors to have ever prevailed, the show seems to lack support from the acting branch.

– For his performance in “Bodyguard,” Madden has already bagged a Golden Globe Award win and Critics’ Choice Award nomination for Best Drama Actor, so he already has more hardware than Harington.

– “Bodyguard,” which is a BBC One series, became a breakout hit after it debuted stateside on Netflix in October. Its Netflix status and short six-episode season make it very accessible to voters who haven’t yet checked out the show.

– Madden could be helped by visibility, as voters will be able to see him on the big screen right before Emmy voting commences, in Dexter Fletcher’s Elton John biopic “Rocketman,” which opens on May 31. Also, with the final season of “Game of Thrones” approaching, Madden could still profit from residual goodwill for his performance as Robb Stark.

– “Bodyguard”‘s August-to-September BBC run and October Netflix release could end up hurting Madden’s chances, as the show may be a distant memory to some voters.

– Although the show picked up a drama series bid at the Globes, it may be a tougher challenge for it to break through at the Emmys. With every Best Drama Actor winner since 2014 having been in a series nominee, Madden’s chances to win could be dependent on across-the-board support for the show.

The good news for both Harington and Madden is that every Drama Actor winner since 2011 has won for either a freshman or final season.

According to our combined Emmy odds, both actors are expected to make the lineup: Madden is in fourth place with odds of 6/1, while Harington sits down in sixth place with odds of 10/1. The other predicted nominees are Jason Bateman (“Ozark”), Bob Odenkirk (“Better Call Saul”), Sterling K. Brown (“This Is Us”), and Milo Ventimiglia (“This Is Us”).