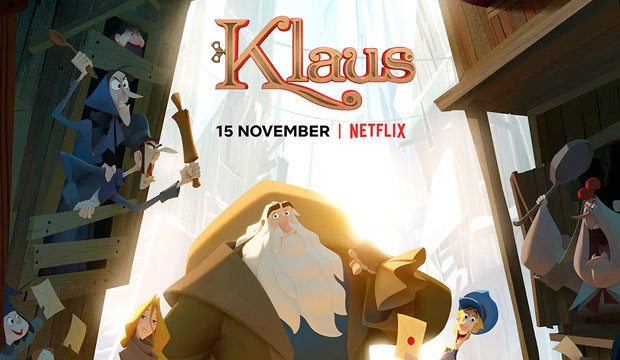 Netflix is continuing its efforts to expand its mark at the Oscars. This year will include an attempt to make it into the race for Best Animated Feature with the Christmas movie “Klaus.” The film marks the directorial debut of Sergio Pablos, who had previously developed the story for “Despicable Me” and the source material for “Smallfoot.” It also features an original song, “Invisible,” written by Justin Tranter.

In the film, Jesper (Jason Schwartzman) is an entitled brat at a postal academy that’s headed by his father. In the hopes of forcing him to make something of himself, Jesper’s father stations him in Smeerensburg, a frozen island above the Arctic Circle. Jesper soon realizes the island is populated by people who have been feuding with each other for generations and has had no use for the postal service. Jesper happens upon a towering recluse, Klaus (J.K. Simmons), who lives in a cabin filled with toys. Jesper gets the idea to start a racket where kids write letters to Klaus and get a toy in return in the hopes that success will help get him off the rambunctious island. However, as Jesper’s idea grows more and more successful, he discovers that the icy feuds start to melt away which doesn’t sit well with the heads of the town’s rival families, the Krums (Joan Cusack) and the Ellingboes (Will Sasso).

This could very well prove to be a strong contender to get into the Oscar contest. The animation is gorgeous. It beautifully mixes 2-D and 3-D aspects for a look that is unlike anything I had seen before. The appearance of the film alone could make this a promising film to get in for Animated Feature.

“Klaus” also puts a fun spin on the idea of Santa Claus and how the mythic elements of his existence came to be. The ways that the Naughty List and the flying reindeer become part of his legend are quite entertaining.

And let us not forget that Netflix does not mess around when it comes to campaigning and they will put all they got into making sure that this film gets in, so underestimate it at your own risk.