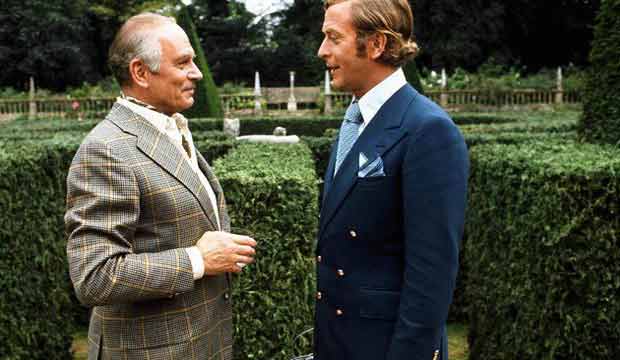 Agatha Christie’s “Murder on the Orient Express” and “Death on the Nile,” Ira Levin’s “Deathtrap” and Robert Altman’s “Gosford Park” are among the classic murder mysteries mentioned as inspiration for Rian Johnson’s deliciously clever thriller “Knives Out,” which has earned three Golden Globe nominations and several critics’ awards.

But alas, dear reader, the game is afoot.

As soon as I saw the puzzle-perfect interior of mystery writer Harlan Thrombey (Christopher Plummer)’s mansion, I thought of the 1972 classic mystery thriller “Sleuth,” starring Laurence Olivier and Michael Caine directed by Joseph L. Mankiewicz and adapted by Anthony Schaffer from his Tony Award-winning 1970 play.

The film version of “Sleuth” earned four Oscar nominations: Best Actor for both Olivier and Caine, director for Mankiewicz (it would be the multi-Oscar-winner’s final film) and John Addison’s playful score. Though most acting honors for lead actor went to Marlon Brando for “The Godfather,” it was Olivier who received the New York Film Critics Circle award for the best of 1972.

I fell in love with “Sleuth” when I saw it on Broadway with Anthony Quayle and Keith Baxter in 1971 and caught the tour in Denver six months later with Quayle and Donal Donnelly. I’ve seen the movie several times-in fact, I just re-watched it for this piece. The love affair continues.

So just how is “Knives Out” cut from the same cloth as “Sleuth?” Well, if you have never seen the movie  or play (forget the misguided 2007 remake with Caine in the Olivier role) you may not want to read past this paragraph!

The Game’s the Same
Both “Knives Out” and “Sleuth” revolve around a popular mystery novelist. In the case of Plummer’s Thrombey, who is already dead at the film’s outset, it is revealed in flashback he is beset with family of spoiled rotten sycophants who appear to have attended one too many MAGA rallies. The only person who treats him with respect and admiration is his Latina nurse Marta (Ana de Armas).

In “Sleuth,” Olivier’s Andrew Wyke is a British snob who loves games and the upper class. He invites his wife Marguerite’s lover (Caine), a lower-class hairdresser named Milo Tindle over to his mansion with a delicious prospect. He wants Milo to steal his wife’s jewelry and take her and the jewelry off his hands. Afterall, Wyke has a young Finnish lover.

Ever the gamesman, Wyke has Tindle put on clown outfit to break into the house and the safe where the jewels are located. But Wyke has other ideas as he proffers a gun and shoots and kills Tindle. Or does he? Both writers love games. Thrombey is obsessed with the ancient board game of Go; Wyke is trying to figure out a centuries old Egyptian board game and enjoys chess and puzzles.

And just as Thrombey’s family, Wyke tells Tindle, who has an Italian immigrant father, that he “hates” him because of his class status. He is not a rich, pure Englishman.

The Homestead
Both Johnson and Mankiewicz were blessed with exceptional production designers.

Veteran Oscar-winner Ken Adam, art director Peter Lamont and set decorator John Jarvis brought Wyke’s countryside British mansion to delicious life. Just as with “Knives Out,” the house is populated with toys, games and automata that seem to be commenting on the cat-and-mouse game between Wyke and Tindle.

And while “Knives Out” has the stately portrait of Thrombey, hanging from one of Wyke’s wall  is a portrait painting of Marguerite, who’s likeness is based on Oscar-winning actress Joanne Woodward.

And both films feature a Jolly Jack Tar the Jovial Sailor. The huge figure plays an important part in “Sleuth” and, in fact, its creepy cackle was supplied by Olivier.

Johnson has created an eccentric, delectable detective Benoit Blanc played to the hilt by Daniel Craig sporting an oversized Southern accent Tennessee Williams would have loved.

And now to the “Sleuth” detective.  The Playbill listed three other actors in the play including a Phillip Farrar as Inspector Doppler. I have always taken pride that I can guess the killer in mystery novels and movies. But when I saw “Sleuth” on Broadway I was in shock-Inspector Doppler was Tindle in disguise. Seems that Wyke had blanks on the gun, so instead of murdering Tindle , he humiliated him.

I wondered how it could be accomplished in the movie, which gives an “introducing” credit to an Alec Cawthorne as Doppler. Though Caine’s make-up, hair and gruff accent are pretty good, I still think it you can tell it’s the actor. But no matter. The scenes in which “Doppler” gets his comeuppance, humiliating Wyke are kicky.

Mankiewicz had a bit of fun with the rest of the credits, listing two “actors” as policemen and an “Eve Channing’ has Marguerite. Any Mankiewicz fan will realize that he combined the names of his two main characters from his 1950 Oscar-winning best film “All About Eve”-Eve Harrington and Margo Channing.