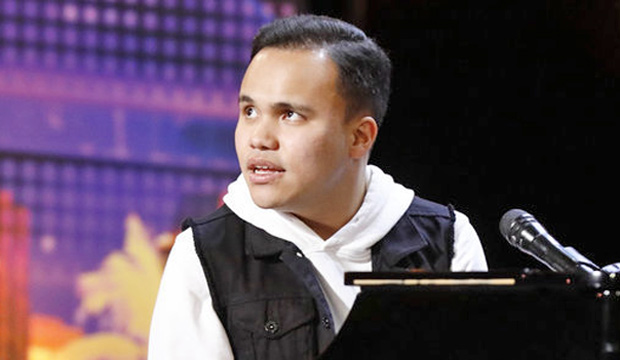 Kodi Lee went viral immediately after his “America’s Got Talent” audition aired in the Season 14 premiere, but since he earned Gabrielle Union‘s Golden Buzzer that meant he wouldn’t be seen again until the live shows. Well, the wait is finally over. The 22-year-old singer will return to “AGT” on Tuesday, August 13 as one of the 12 acts competing in the first round of Quarterfinals. No one seems more excited that Kodi’s back than Kodi himself, as he recently tweeted, “I can’t wait to perform for you all. Thank you for all your love and support through my journey.”

Singer/pianist Kodi was born blind and autistic, as his mother explained to the judges before he delved into a pitch-perfect rendition of Donny Hathaway‘s “A Song for You.” “We found out that he loved music really early on,” she told Gabrielle, Simon Cowell, Howie Mandel and Julianne Hough. “He listened and his eyes just went huge and he started singing. That’s when I realized, oh my gosh, he’s an entertainer.” (Re-watch Kodi’s audition right here.)

After Kodi’s performance ended, everyone in the audience jumped up to their feet in a wild standing ovation. Howie told Kodi he was a “great inspiration” and a “great talent.” Julianne remarked, “I really feel your heart, your passion, your voice.” Simon noted, “What just happened there was extraordinary.”

“I’m a new judge this season and I’m also a new mom this year,” Gabrielle began when it was her turn to speak. “It’s the toughest job I’ve ever had and the most rewarding job I’ve ever had. You just want to give your kids the moon, the stars and the rainbows. And tonight I’m gonna give you something special.” She then slammed her hand down on the Golden Buzzer, sending Kodi straight through to the live shows.