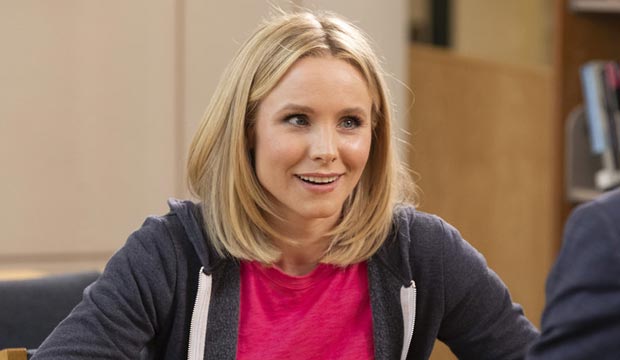 The Daytime Emmys could turn out to be the real good place for Kristen Bell, who is nominated for Best Short Format Daytime Program for “Momsplaining,” the web series she hosts and produces on Ellen DeGeneres‘s digital network. But what’s amazing isn’t that she could win an Emmy, but that this is the first time she has ever even been nominated, in daytime or in primetime. What the fork, TV academy?

Bell appeared in a couple of episodes of the Emmy-winning series “Deadwood” in 2004, but her big breakthrough was in the title role as a high school private eye on “Veronica Mars.” She played that role for three years, resulting in a Television Critics Association nomination — not to mention two wins for Best Drama Actress at the Gold Derby TV Awards. But that show aired for its first two seasons on UPN and then for its last season on the CW, and both of those networks are virtually invisible to the television academy, so the show never received a single Emmy nomination.

She followed “Mars” with roles on shows that were on Emmy voters’ radar, like “Heroes” and “Parks and Recreation,” but still no luck. Then she was a regular on Showtime’s dark comedy “House of Lies” about a team of management consultants, but while her co-star Don Cheadle was nominated for four years in a row at the Emmys (2012-2015), Bell never got the time of day.

Now Bell stars in “The Good Place” on NBC.  The unconventional comedy about the afterlife is loved by critics and has earned Bell recognition from other groups, including nominations from the Golden Globes, TCA Awards and Critics’ Choice Awards, but while her co-star Ted Danson broke through at the Emmys in 2018, Bell is still waiting for her first nom.

But forget those primetime sons of benches and their bullshirt snubs. If you want to win an Emmy, what better way than to team up with Ellen DeGeneres, who has won literally dozens of them for her self-titled daytime talk show. Bell and her husband Dax Shepard are frequent guests on the talker, and then Bell and DeGeneres teamed up on “Momsplaining,” which streams on Ellentube and gives advice to new and expectant mothers.

So is this the ticket to a long overdue Emmy for Bell? She’s up against the design series “Blank Wall Overhaul” (Blueprint), the nutrition series “Food Interrupted” (Huffington Post), the addiction docuseries “Treatment Box ‘Opioids'” (Truth Initiative) and the short film “Watchtower” (Vimeo). That’s about as wide an array of programs as you can get, so it’s hard to say which way Emmy voters might go, though the combined star power of DeGeneres and Bell may make them the big fish in a relatively small pond. So by May we may be able to call Bell an Emmy winner at last.