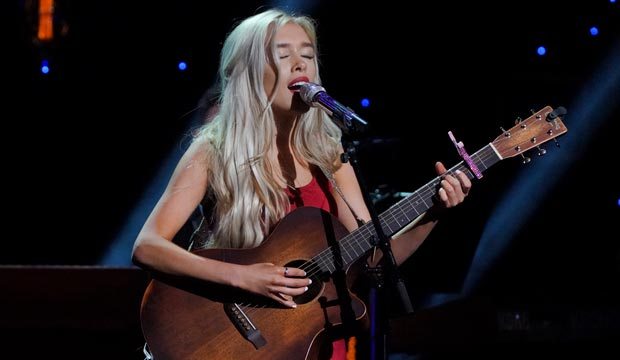 Laci Kaye Booth didn’t win enough viewer votes on the Top 6 episode of “American Idol” to make it into the semi-finals. But Luke Bryan, Katy Perry and Lionel Richie used their one judges save of the season on May 5 to throw her a lifeline and give her the last slot in the Top 5. Unfortunately for Laci, her most recent performances have not been the post popular with viewers.

We polled “Idol” fans to rank her nine performances to date and their favorite was her first. That cover of the Ray Charles classic “Georgia on My Mind” from the Top 40 show has earned a whopping 28% of the total tally to date. Also scoring well with viewers were Laci’s Top 20 solo —  “I Want You To Want Me” by Cheap Trick — which has 23% of the vote, and her Top 20 duet with Brett Young on his hit “Mercy,” which merits 12% support.

By comparison her two Top 6 songs — The Bee Gees (“To Love Somebody”) and Journey (“Open Arms”)  —  come in at 11% and 10% respectively. Do you agree with these results? Take a look at Booth’s set list below and then weigh in with your pick as to her best song so far on season 17.

And be sure to make your predictions so that all of the remaining “American Idol” contestants can see how they’re faring in our racetrack odds. You can keep changing your predictions until just before the next episode airs on ABC. You’ll compete to win a spot on our leaderboard and a $100 Amazon gift card.