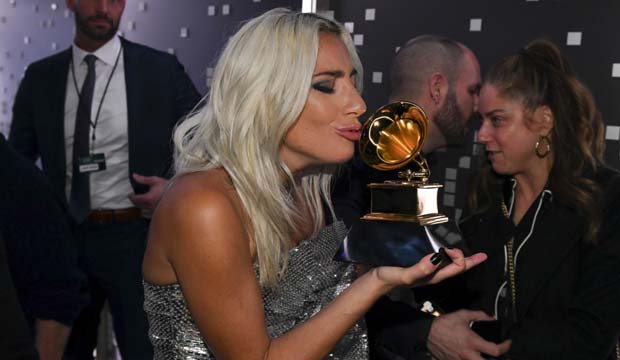 The Grammys love Lady Gaga — she has won 9 times out of 24 nominations — but she has never won in the general field despite several attempts. 2019 was one of her best years yet with five bids and three victories, and she could enjoy another windfall thanks to “A Star is Born,” whose soundtrack was released in October at the start of the current eligibility period. Could she finally win Album of the Year?

After Gaga broke through on the music scene a decade ago she achieved a rare feat by earning three AOTY straight nominations for three straight albums. Only Frank Sinatra, The Beatles, Barbra Streisand, Stevie Wonder and Kanye West had achieved that feat before her, and it was even more impressive because Gaga did it with her first three albums in three consecutive years: “The Fame” in 2010, “The Fame Monster” in 2011 and “Born This Way” in 2012. But none of them won, and she hasn’t been nominated in that top category since.

Then came “A Star is Born.” The movie musical won her an Oscar for Best Original Song for “Shallow” earlier this year. That duet with Bradley Cooper also won her Best Pop Duo/Group Performance and Best Visual Media Song. It was eligible at the 2019 Grammys because it was released as a single just before the September 30, 2018 eligibility cutoff. Since the soundtrack album came out in October, now it’s eligible for the 2020 awards and could bring her another armful of trophies.

When Gaga earned her first three Album of the Year Grammy nominations there were only five available slots in the field. Now there are eight, so grabbing a nomination for such a high-profile album may not be the hardest part. But to win, she’ll have to overcome the Grammy bias against soundtracks. Only three have ever won: “Saturday Night Fever” in 1979, “The Bodyguard” in 1994 and “O Brother, Where Art Thou?” in 2002. Last year another overdue artist made a play for Album of the Year with a well-regarded soundtrack (Kendrick Lamar for “Black Panther”), but lost to Kacey Musgraves‘s aptly titled “Golden Hour.”

However, the Album of the Year nomination for “Black Panther,” along with the Record of the Year and Song of the Year bids for “Shallow,” indicate that Grammy voters might be warming back up to movie music in top categories. Can Gaga put a soundtrack back in the winner’s circle?