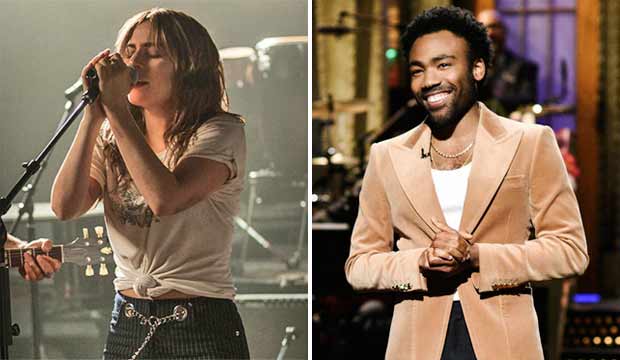 The Oscar for Best Original Song looks like it might be a cakewalk for Lady Gaga and Bradley Cooper‘s “Shallow” from “A Star is Born.” But they face a tougher challenge in the Grammy race for Record of the Year, and as of this writing it’s too close to call. “Shallow” is tied with Childish Gambino‘s “This is America” with leading odds of 9/2. So who really has the lead? Well, it depends on who you ask.

The Expert journalists we’ve polled give the slight advantage to “Shallow.” Three of them are backing the movie tune: Joyce Eng (Gold Derby), Lyndsey Parker (Yahoo Music) and Adnan Virk (ESPN). The other two are forecasting “This is America”: Bonnie Fuller (Hollywood Life) and Glenn Gamboa (Newsday).

The Gold Derby Editors who cover awards year-round also break in favor of “Shallow.” Chris Beachum, Susan Wloszczyna, Eng and I are betting on the Gaga-Cooper duet, while Rob Licuria and Paul Sheehan favor “This is America.”

But the scales tilt the other way in the predictions of our most elite users. The Top 24 Users who got the highest scores handicapping last year’s Grammy winners give “This is America” a narrow advantage over “Shallow” (12 to 10). And the All-Star Top 24 who got the highest scores when you combine the last two years’ Grammy results are even more strongly in favor of “This is America” (12 to 7).

SEEWho’s mostly likely to have a clean sweep at the Grammys: Lady Gaga, Kendrick Lamar, Drake or …? [POLL]

“Shallow” has the benefit of recency. It was released as a single at the end of September, and Gaga and Cooper have been regular fixtures on the movie awards circuit for “A Star is Born,” keeping the song fresh in mind for Grammy voters too. But movie music has fallen out of favor in the top Grammy categories in recent years. The last soundtrack song to win Record of the Year was Celine Dion‘s “My Heart Will Go On” from “Titanic” 20 years ago.

Meanwhile, “This is America” has the benefit of being the bigger hit. It debuted at number-one on the Billboard Hot 100 singles chart and stayed there for two weeks. The music video was a viral sensation that lent the song even greater social and cultural significance. However, hip-hop music has never been in favor with the recording academy. This would be the first such song in history to win Record of the Year.

SEESexiest Men Alive at the Grammys: Bradley Cooper, Hugh Jackman and Ryan Reynolds could all be winners this year

So it looks like this might be a nail-biter right to the end, and it may not just be down to those two songs. The voting dynamics might be quite different this year since there are eight nominees in this category instead of five. Perhaps the Grammys will really go off the deep end and give us a winner none of us are expecting.