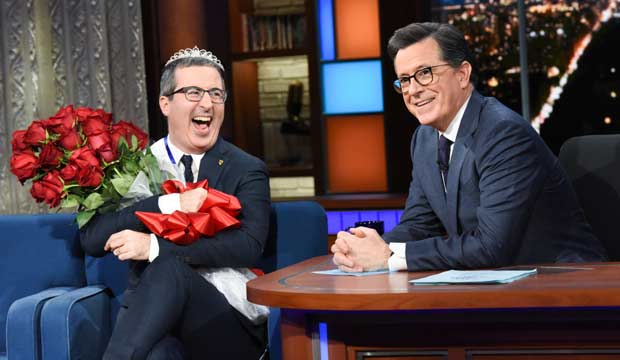 HBO‘s “Last Week Tonight with John Oliver” is the three-time defending champion for Best Variety Talk Series at the Emmys, but that doesn’t necessarily mean it’s guaranteed to four-peat this year. While it is indeed the front-runner again according to the combined predictions of Gold Derby users, several of the Expert journalists from top media outlets we’ve polled think “The Late Show with Stephen Colbert” will overtake him this time. Easier said than done?

When it comes to talk shows at the Emmys, it’s tough to stop a winning streak once it gets started. “The Late Show with David Letterman” won Best Variety Series five times in a row (1998-2002). Immediately after that “The Daily Show with Jon Stewart” won 10 times in a row (2003-2012). Then Colbert won twice with his previous series, “The Colbert Report” (2013-2014) only for Stewart to roar back with one final win in 2015 after the top variety category was split into separate contests for talk shows and sketch shows. Colbert took over “Late Show” after that, but fellow “Daily Show” alum Oliver was the one who filled the Emmy void, winning from 2016-2018.

So can we expect another half dozen or so victories for “Last Week Tonight” before all is said and done? We don’t have to look that far ahead right now, but as of this writing most of our Emmy Experts do think he’ll win number-four — 13 out of 20 of them to be exact. However, Oliver might not be as indomitable as Stewart once was because six Experts are betting on a Colbert retort: Mary Murphy (Gold Derby), Tom O’Neil (Gold Derby), Lynette Rice (Entertainment Weekly), Ken Tucker (Yahoo), Glenn Whipp (LA Times) and Stacey Wilson Hunt (Gold Derby).

That leaves one last Expert, Ed Martin (Media Village), going out on a limb for “The Late Late Show with James Corden,” but maybe that’s a sturdier limb than we think; though he has yet to win the top award, Corden is already a seven-time Emmy winner in other categories. Do you agree that Colbert or Corden could topple the current king, or will Oliver’s reign continue?