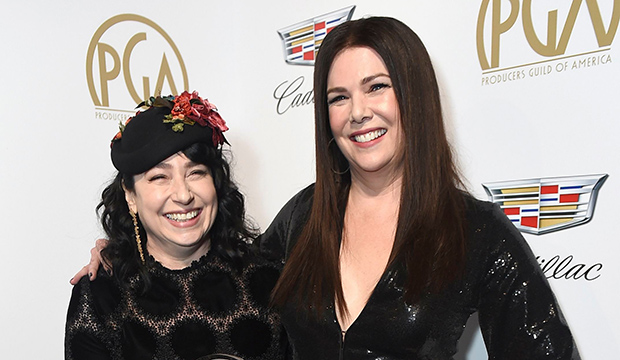 There may be a “Gilmore Girls” reunion in the offing — and this one might at long last get Lauren Graham some Emmy love.

At the PaleyFest red carpet for “The Marvelous Mrs. Maisel” over the weekend, creator Amy Sherman-Palladino shared with “Entertainment Tonight” that she’s trying to fulfill her “Gilmore Girls” leading lady’s wish to be on her Amazon series.

“Lauren made a request, and Lauren is my queen and the reason I have a career, so I honor the request of Lauren Graham. I’m trying to figure it out,” Sherman-Palladino said. “Hopefully [she’ll be in Season 3] It would be lovely.”

Graham has been angling for a part on “Maisel” since last year. “Lauren wants to be something very specific,” Sherman-Palladino told The Hollywood Reporter in January 2018. “She has it all figured out.”

Sherman-Palladino did not divulge what Graham has in mind, and it’s so secretive that Sherman-Pallandino’s husband and fellow “Maisel” executive producer Daniel Palladino is being kept in the dark. “I can’t tell you the role, because then you’ll know!” she said.

What could Graham play? Another stand-up comic would be the obvious choice. We know she can rattle off lines a mile a minute, so punchlines would be no big deal. She could cross paths with Midge (Rachel Brosnahan) on tour.

If this does come to pass, maybe Graham can finally get her first nomination. She was overlooked during the entirety of “Gilmore Girls”‘ run and for the 2016 four-part revival. Last year, she was in contention for Best Comedy Guest Actress for “Curb Your Enthusiasm,” but was ultimately snubbed (“Maisel” guest star Jane Lynch did make the cut).

Meanwhile, it feels like all of Graham’s Star Hollows colleagues are getting recognized: Melissa McCarthy took home Best Comedy Actress for “Mike & Molly” in 2011 and Best Comedy Guest Actress for “Saturday Night Live” in 2017; Alexis Bledel won Best Drama Guest Actress for “The Handmaid’s Tale” in 2017 and was nominated in supporting last year; Milo Ventimiglia has two Best Drama Actor nominations for “This Is Us”; and “Maisel” ruled with eight wins last year, including writing and directing for Sherman-Palladino and Best Comedy Supporting Actress for Alex Borstein, who recurred on “Gilmore Girls.”

Since “Maisel” is an Emmy darling, if this potential role can’t do it for Graham, then she is just cursed.