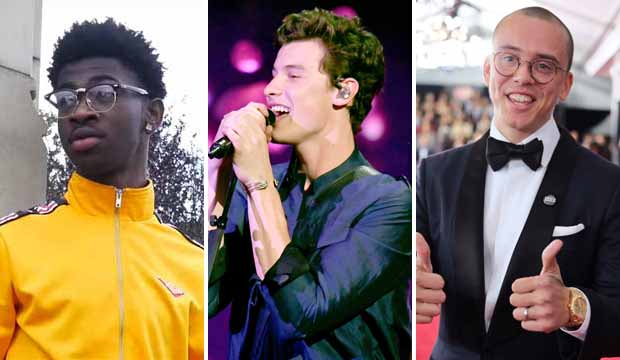 Lil Nas X is triumphant again. The rapper’s breakthrough country/hip-hop hybrid “Old Town Road” stares down another threat to its Billboard Hot 100 supremacy and holds on to the top spot for the sixth week in a row. This week his biggest new challengers were Shawn Mendes and Logic, who jumped onto the chart dated May 18 with new music.

Mendes released “If I Can’t Have You” on May 3, and the music video dropped on the same day. It debuted in the number-two spot, which makes this his fourth top-10 single and the highest-charting of his career. He previously peaked at number-four with “Stitches” and at number-six with “Treat You Better” and “There’s Nothing Holdin’ Me Back.”

Meanwhile, Logic storms in with “Homicide,” his collaboration with Eminem, which enters at number-five. This is only the second top-10 hit in his career. He previously peaked at number-three with “1-800-273-8255” featuring Alessia Cara and Khalid, which earned him a Grammy nomination for Song of the Year.

“Old Town Road” held them both off one week after keeping Taylor Swift‘s new single “Me!” out of the top spot. Now “Me!” is down one place to number-three, while the Jonas Brothers‘ “Sucker” is at number-four. Once again, “Old Town’s” success is largely propelled by streaming performance: 104.1 million this past week alone, which is actually up slightly from last week’s total. The song now has five of the top seven streaming weeks in history. The other two belong to Drake‘s “In My Feelings,” which topped the Hot 100 last summer.

How much longer do you think “Old Town Road” will continue to dominate the chart? And who will be the one to take him down?

AMAs performers 2019: Camila Cabello and Shawn Mendes added to the lineup, but how many awards will they…

Shawn Mendes VMAs performance: He sings 'In My Blood' in his wet T-shirt [WATCH]