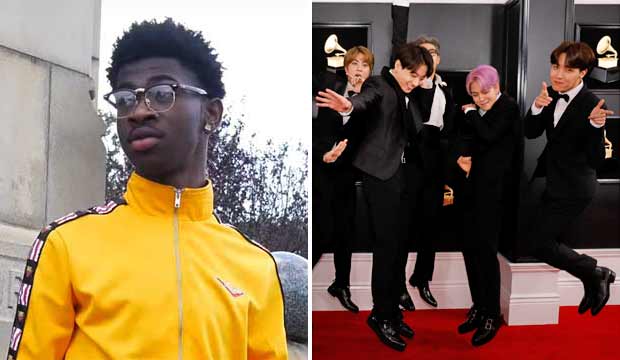 Lil Nas X‘s “Old Town Road” holds onto the top spot on the Billboard Hot 100 singles chart for the third week in a row. He held that position all by himself in its first week, but after controversy over Billboard removing the song from the country chart he re-recorded the song with Billy Ray Cyrus, who has joined him at No. 1 for weeks two and three. It’s actually the first chart-topper of Cyrus’s career, but while “Old Town Road” is controversial as a country song, BTS makes history on the chart for another country altogether.

“Old Town Road” holds the lead position thanks in large part to its record-breaking streaming performance. Last week the song set a new record for the most streams in a single week (143 million). It’s down a little this week, but still has the second most streams of all time (125.2 million). The previous record-holder was Drake‘s “In My Feelings,” which maxed out at 116.2 million streams last summer.

Meanwhile, the K-pop boy band BTS notch another new milestone on the Hot 100. Their single “Boy with Luv” featuring Halsey, launches in at number-eight, which makes it their second top-10 single and the highest-charting single for a K-pop group in history. It exceeds their previous Hot 100 high point: their “Fake Love” peaked at number-10 last June. Only one K-pop artist has ever risen higher: solo singer Psy, who reached number-two with “Gangnam Style” and number-five with “Gentleman.”

This achievement for BTS comes as their latest album, “Map of the Soul: Persona,” topped the Billboard 200 albums chart, marking the Korean band’s third number-one album in less than 11 months. Not bad for a year’s work.