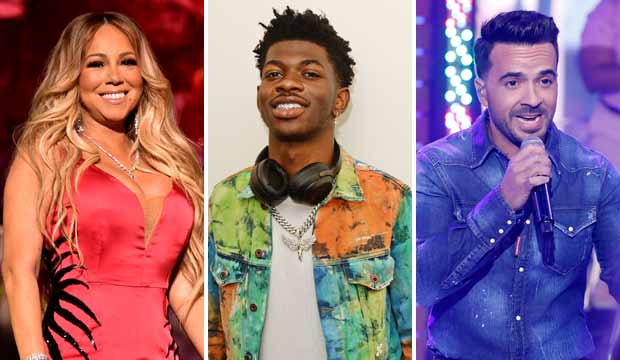 Trying to beat Lil Nas X and Billy Ray Cyrus‘s “Old Town Road” on the Billboard charts has been a road to nowhere for everyone from Taylor Swift to Shawn Mendes, and the Hot 100 singles chart dated July 13 was no exception. The song has now topped the chart for 14 weeks, making it one of the 10 longest-running chart-toppers in history. Now it’s just two weeks away from tying the record, so it might be time for Mariah Carey and Luis Fonsi to panic.

Mariah Carey and Boyz II Men teamed up in 1995 on the elegiac single “One Sweet Day,” which was the first song ever to spend 16 weeks at No. 1. That record held for more than two decades before Luis Fonsi, Daddy Yankee and Justin Bieber tied that mark with “Despacito” in the summer of 2017. “Despacito” was finally knocked out of the top spot when Taylor Swift‘s “Look What You Made Me Do” debuted ahead of it, but Swift has already tried and failed twice to unseat “Old Town Road.”

And “Road” isn’t showing any signs of slowing down. It’s still the top streaming song in the country by a wide margin with almost 90 million online listens, which is actually up slightly from last week. Compare that to the current second-place song, “Bad Guy” by Billie Eilish, which had fewer than half as many streams this week (41 million). “Old Town Road” is also still the bestselling song of the week too.

So the song isn’t just holding on to No. 1 overall, it’s doing so decisively, and I’m not sure anyone else is going to be able to challenge it before it at least ties the all-time record. And might I add, it’s pretty damn remarkable that in 2019 a country-rap fusion song by a queer black artist is battling a Spanish-language Puerto Rican hit and a ballad by a mixed-race woman and an R&B group to be America’s biggest hit of all time. Talk about a melting pot.