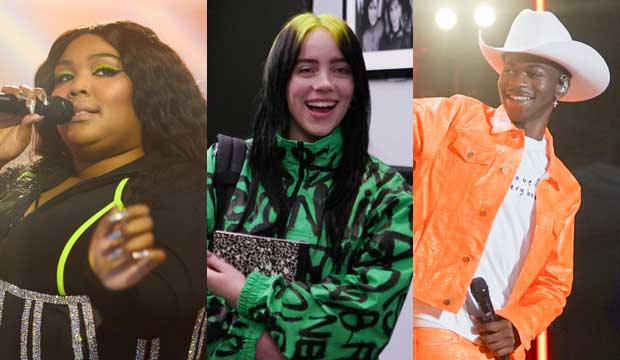 For the first time in Grammy history, two new artists swept the top four general field categories with nominations: Billie Eilish and Lizzo contend in all four races, and they’re also the most nominated artists of the year along with Lil Nas X. That means newcomers dominated this year’s awards. Check out the list of nominees here.

Eilish, meanwhile, has six noms. “When We All Fall Asleep, Where Do We Go?” made the cut for Album of the Year and Best Pop Album, while “Bad Guy” picked up noms for Record of the Year and Song of the Year, plus Best Pop Solo Performance. And Eilish also earned a nom for Best New Artist. So Pop Album is the only category where Eilish isn’t pitted against Lizzo head to head.

Lil Nas X also has six nominations. In addition to his own Best New Artist bid, “Old Town Road” featuring Billy Ray Cyrus earned bids for Record of the Year, Best Pop Duo/Group Performance and Best Music Video, while “Panini” is in the running for Best Rap/Sung Performance and his debut EP “7” surprised us by earning him a spot in the Album of the Year lineup.

Following close behind those leaders are Ariana Grande and H.E.R. with five nominations apiece, including Album of the Year for “Thank U, Next” and “I Used to Know Her,” respectively. Rounding out that top category are “I, I” by Bon Iver, “Norman Fucking Rockwell” by Lana Del Rey and “Father of the Bride” by Vampire Weekend. Who are you rooting for to win top honors?