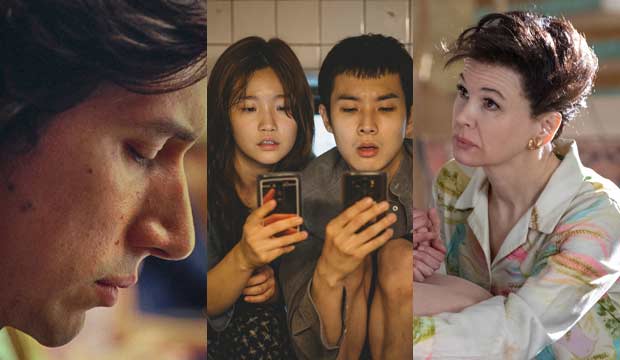 “Parasite” is poised to win top honors at the Los Angeles Film Critics Association Awards, which will be announced this Sunday, December 8. That’s according to the combined predictions of Gold Derby users who have made their forecasts here in our predictions center. Aniticipating the fickle critics prizes from year to year is always tricky (the New York Film Critics Circle defied our expectations in many categories earlier this week), but this wouldn’t be the first time LAFCA looked beyond our borders for their favorite film. Scroll down to see our complete predictions.

Elsewhere, we’re betting on a Best Actor victory for Adam Driver (“Marriage Story“). West coast journos have already shown their fondness for him, awarding him Best Actor in 2016 for the more under-the-radar indie “Paterson.” Renee Zellweger (“Judy“) is the front-runner for Best Actress for her role as troubled superstar Judy Garland; that would be her first prize from LAFCA.

Supporting awards are expected to go to Laura Dern (“Marriage Story,” perhaps jointly with “Little Women”), who was just awarded by NYFCC, and Brad Pitt (“Once Upon a Time in Hollywood”). That would be the first LAFCA acting victory for Pitt, while Dern previously won their New Generation Award back in 1985 for her performances in “Mask” and “Smooth Talk.”

Do you think our predictions are right on the money, or will the LA critics surprise us as much as the New Yorkers did? Make or update your own predictions here before this weekend’s announcement.

BEST SUPPORTING ACTOR
Brad Pitt, “Once Upon a Time in Hollywood” — 12/5