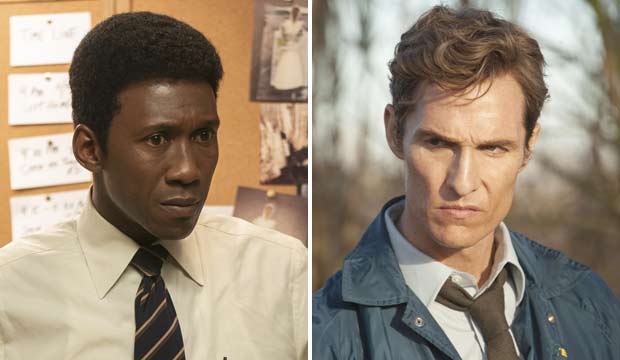 Best Movie/Mini Actor is shaping up to be one of this year’s most challenging Emmy contests. There are at least six actors who could win, but despite the onslaught, Mahershala Ali (“True Detective”) is holding onto his front-runner position with leading odds of 9/2 as of this writing for his role as an Arkansas cop investigating the disappearance of two children. Those odds are based on the combined predictions of thousands of Gold Derby users who have placed there bets here in our predictions center. If Ali does win, he’ll be the first “True Detective” actor to do so, achieving what Matthew McConaughey couldn’t five years ago.

Ali and McConaughey share the distinction of going into the Emmys with “True Detective” on the heels of winning an Oscar. McConaughey won Best Actor for “Dallas Buyers Club” a few months before his Emmys, and Ali just won Best Supporting Actor for “Green Book” — his second Oscar in three years, no less. But there’s a big difference in their Emmy candidacies. When McConaughey starred in the first season of the anthology series, HBO opted to enter it as a drama series, but Emmy rules now dictate that the show compete as a limited series.

McConaughey was done in by the “Breaking Bad” steamroller when Bryan Cranston beat him for Best Drama Actor for that show’s final season. But just because Ali is gunning for Best Movie/Mini Actor instead, that doesn’t mean he has an easier path to victory. In the five years since “True Detective” first competed at the Emmys, limited series have exploded on TV to the point that the contenders for Best Movie/Mini Actor are giving the caliber of performances that would be formidable at the Oscars, let alone the Emmys.

However, there are another 14 Experts who say Ali will lose, though they can’t agree on who will beat him. Five say it’ll be fellow Oscar champ Sam Rockwell (“Fosse/Verdon”). Three say Hugh Grant (“A Very English Scandal”). Three say Jharrel Jerome (“When They See Us”). Two say Jared Harris (“Chernobyl”). And one says Ian McShane (“Deadwood: The Movie”). And while no Experts are currently predicting Benicio Del Toro (“Escape at Dannemore”) to win, almost all of them think he’ll at least be nominated, so we mustn’t count him out either. Where do you stand on one of the Emmys’ most confounding races this year?