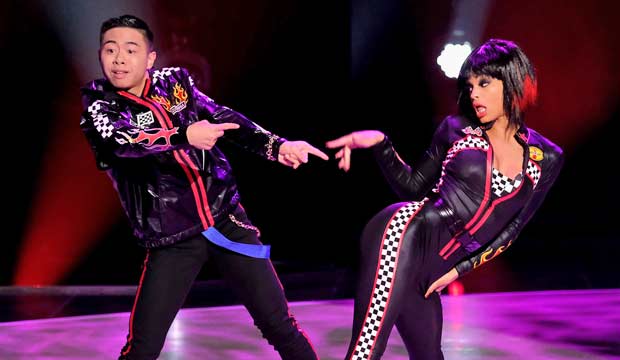 Contemporary dancer Madison Jordan went into the “So You Think You Can Dance” season 16 live shows as the front-runner to win the competition, according to the combined predictions of fans who give us their forecasts here every week, but after two stellar live duets, Mariah Russell and Bailey Munoz have charged ahead. So where do the contestants stand now with the competition narrowed down to the top eight?

As of this writing Russell is the favorite to win with leading odds of 8/5, followed by her partner Munoz with odds of 31/10. For Russell that’s a huge leap from her fourth place odds of 9/1 before “Top 10 Perform, Round 2.” But Munoz is stable, holding steady in second place from last week. They dynamic duo performed a stellar “Love Shack” jazz number in the first live show of the season. then they closed the second live show with a “Tempo” hip-hop routine so fire that judge Nigel Lythgoe declared them the couple to beat.

Also holding steady in our predictions is Gino Cosculluela in third place with odds of 4/1. The judges thought he lacked personality during his hip-hop routine in the first live show, but despite their disappointment, he was not in danger when the bottom two men were announced this week. That shows just how much fan support he has, and since his jive routine was such a dramatic comeback for him, America may keep him safe yet again when the top eight perform. And maybe the viewing audience will carry him all the way to the finale. But his partner Stephanie Sosa was eliminated, so we’ll have to see how well the audience responds to his new pairing.

That means Jordan has dropped from first place to fourth place in our predictions with 17/2 odds, and it’s a testament to the quality of this year’s contestants that it’s not because of any mistakes she made. The judges have loved both of her live duets so far, and she wasn’t in the bottom two when vote results were revealed, though her partner Ezra Sosa was in jeopardy (the judges saved him, though, choosing to eliminate Eddie Hoyt instead). So as the ground keeps shifting under them, the remaining eight dancers will have to keep on their toes — literally and figuratively.