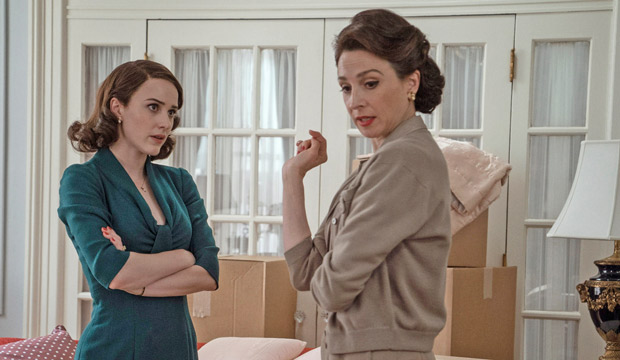 Marin Hinkle has been acting for more than 20 years, starring in everything from “Once and Again” to “Two and a Half Men.” But it’s her role as Rose Weissman on Amazon’s “The Marvelous Mrs. Maisel” that’s finally put her on the awards map. This year Hinkle shared the ensemble prize at the SAG Awards along with the rest of “The Marvelous Mrs. Maisel” Season 2 cast, including Rachel Brosnahan as the titular Miriam “Midge” Maisel, Alex Borstein as Susie Myerson and Tony Shalhoub as Abe Weissman. Might Hinkle now follow up her SAG notice with some Emmy love?

As of this writing, six of Gold Derby’s editors believe that Hinkle will receive her first career Emmy nomination this year in the Best Comedy Supporting Actress category: Rob Licuria, Joyce Eng, Daniel Montgomery, Susan Wloszczyna, Matt Noble and Marcus James Dixon. In addition, 16 of our Top 24 Users and 16 of our All-Star Users include Hinkle in their Emmy predictions for the second season of “The Marvelous Mrs. Maisel.”

The good news for Hinkle is that one of last year’s nominees in this category, Zazie Beetz, is not eligible to return since “Atlanta” didn’t air within the 2018-19 eligibility period. The bad news is that the other seven Emmy contenders (yes, seven, because of an apparent tie) will all be on the ballot again: reigning champ Alex Borstein (“The Marvelous Mrs. Maisel”), Betty Gilpin (“GLOW”), Laurie Metcalf (“Roseanne,” who now competes for “The Connors”), Megan Mullally (“Will & Grace”), and Aidy Bryant, Leslie Jones and Kate McKinnon (“Saturday Night Live”).

SEE‘The Marvelous Mrs. Maisel’ won more guild awards than any comedy ever in a single year

One of the reasons why Hinkle may have been overlooked last year for an Emmy bid is because she faced strong competition from co-star Borstein, who plays the more wild and over-the-top character on Amazon’s comedy. Hinkle’s character, conversely, is more subtle and low-key, two characteristics that awards voters typically don’t go for.

In Season 2 of “Mrs. Maisel,” Rose has a midlife crisis and moves to Paris on a whim after growing bored of her life in New York City. It’s a standout storyline for Hinkle as she becomes the main focus for the first time and even gets to flex her acting muscles by speaking in French. Hinkle’s chemistry with Brosnahan and Shalhoub was never stronger than in the scenes when Rose’s family tries to convince her to snap out of her stupor and return home.