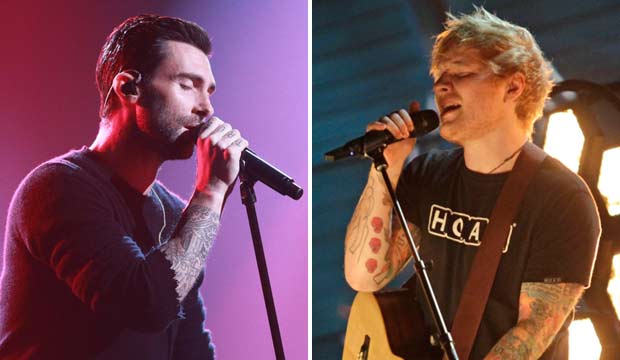 Ariana Grande‘s “7 Rings” is number-one on the Billboard Hot 100 for the second week in a row, but there’s history in the making a little farther down this week’s chart dated February 9. Maroon 5 and Cardi B‘s “Girls Like You” holds the number-10 spot, which marks its 32nd nonconsecutive week in the top 10. Only one song has ever spent longer in that upper echelon: Ed Sheeran‘s “Shape of You,” which was in the top 10 for 33 weeks in 2017.

LeAnn Rimes was the first artist to spend 32 weeks in the top 10 when her hit “How Do I Live” was a mainstay on the charts from 1997-1998. That record was untouched until 2017, when The Chainsmokers and Halsey tied it with their collaboration “Closer.” Then Sheeran beat the record later that year with “Shape of You.”

“Girls Like You” peaked for Maroon 5 and Cardi B last fall when it spent seven weeks at number-one. But after it fell from the top spot in November it lingered in the top 10, gradually racking up weeks until finally tying “How Do I Live” and “Closer” for the second-longest top-10 run. But they’re at exactly number-10 this week. Can they hold to tie Sheeran’s all-time record?

Probably. There was a little thing called the Super Bowl on February 3, and Maroon 5 headlined the Halftime Show. There’s a good chance their appearance at the year’s most watched television event will give them enough of a boost on the charts to make history. Might they even break Sheeran’s record the week after that?

As the Adam Levine-fronted band awaits their Billboard fate, they could get an additional boost over the weekend at the Grammys, where “Girls Like You” is nominated for Best Pop Duo/Group Performance. But they’re underdogs in that race, according to our racetrack odds; we think voters will go Gaga over “Shallow” from “A Star is Born” instead. There wouldn’t happen to be another Super Bowl they could perform at in the meantime, is there?