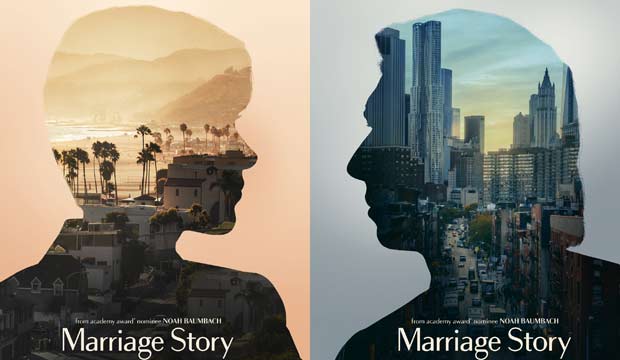 Noah Baumbach‘s “Marriage Story” very much plays like a 2019 version of Robert Benton‘s 1980 Best Picture winner “Kramer vs. Kramer.” It’s an obvious comparison, but an unavoidable one. But why would you want to avoid it? Aside from Best Picture, Benton’s film won four more Oscars – Best Actor for Dustin Hoffman, Best Supporting Actress for Meryl Streep, and both Best Director and Best Adapted Screenplay for Benton.

That film has become the hallmark picture – a piece of work that sets the bar for all films of the same genre dealing with themes of family, marriage, divorce, and the custody of a child. And Baumbach’s Netflix drama, which will be released in theaters for a month beginning Nov. 6, more than meets the bar. Indeed, it threatens to exceed it as evidenced by the film’s top placement on our various Oscar prediction charts.

Based, in part on his own experiences with divorce Baumbach tells the story of actress Nicole (Scarlett Johansson) and theatre director Charlie (Adam Driver), taking an incisive and compassionate look at a marriage breaking up and a family staying together.

This was only the third movie of this year’s London Film Festival to receive a round of applause at the film’s finish, following festival opener “The Personal History of David Copperfield” and Taika Waititi‘s “Jojo Rabbit.” However, “Marriage Story” is the first film of the festival to receive TWO rounds of applause – one at the end and one after Driver’s Charlie sings Stephen Sondheim‘s anthem “Being Alive.”

It’s a moving scene where Charlie vents varying feelings – of hope, of frustration, of love, of pain. Driver’s performance starts off as the quieter one, with Johansson given the flashier moments earlier on, but gradually we see more and more of Charlie’s emotions and Driver’s talents as his character struggles with the heart-rendering process of a divorce and a custody battle.

Driver has opportunities to shout, to rage, to cry, to sob, to deliver anger-fuelled put-downs – and he owns it all. He was nominated last year by the academy for Best Supporting Actor for Spike Lee‘s “BlacKkKlansman.” Here he takes centre stage as the film’s definitive leading man and nails every scene he is in. You can sense his frustration and can truly tell he is a good person despite the character’s faults. Perhaps we even sympathize with Charlie more than Nicole – he does seem more intent on doing the right thing and being fairer, whereas it is suggested that Nicole is being a little more deceitful (perhaps unknowingly). So, we may root for Driver a little more and, by the end, we are crying with him.

However, that isn’t to say that Baumbach is unfair on Johannson’s Nicole – the blame (or, sometimes, lack thereof) is shared between the two of them and no one is explicitly made out to be the villain. It’s an equal affair (there is an affair involved, by the way) – and Johansson gives us another performance that makes us wonder why she hasn’t been nominated for an Oscar yet. Hers is the flashier of the two roles – with her eyes constantly shining with tears and has more in common with that of Emma Stone in “La La Land (2017) than Streep in “Kramer vs. Kramer.”

As Baumbach’s script is this good, everyone chews scenery without seeming like they are. It’s dramatic as hell, but it feels so natural. Even Laura Dern, as high-flying LA lawyer Nora (and in another killer role for the actress experiencing a bit of a renaissance – Dernaissance?) remains grounded and real despite being a little larger than life. She delivers the goods in an instantly iconic scene about gender inequality in the expectations of what makes a good mum or dad. It’s killer. A third Oscar nomination for her would not be amiss, following a Best Actress bid 1992 for “Rambling Rose” and a Supporting Actress one in 2015 for “Wild.”

It’s Baumbach, however, who deserves awards the most. His direction is clear and precise, yes, but it’s his script that needs most rewarding. You could imagine it as a novel or a play with ease – and Baumbach deserves his second Original screenplay nomination after his 2006 recognition for “The Squid and the Whale.”