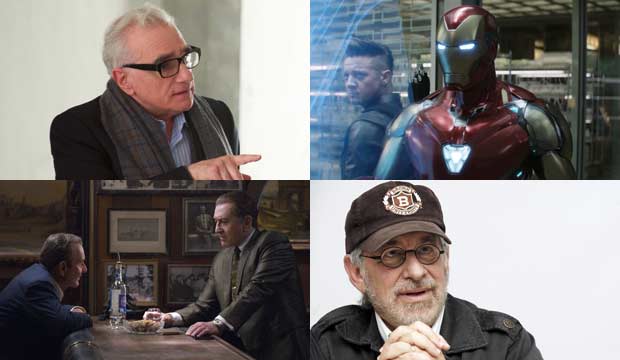 “That’s not cinema,” Martin Scorsese recently told Empire Magazine in reference to the Marvel Cinematic Universe. The beloved filmmaker is getting rave reviews for his latest film “The Irishman,” but is he right to dismiss the entire Marvel franchise? After all, “The Irishman” will stream on Netflix shortly after a limited theatrical run, and another touted director, Steven Spielberg, doesn’t think that’s cinema either. So what really constitutes cinema, and who gets to decide? Scroll down to vote in our poll to let us know who you think is on the right side of this argument.

“Honestly, the closest I can think of them, as well made as they are, with actors doing the best they can under the circumstances, is theme parks. It isn’t the cinema of human beings trying to convey emotional, psychological experiences to another human being,” Scorsese added. But is that true for all superhero movies? That blanket statement doesn’t seem to capture the cultural trauma explored by “Black Panther” or the moral dilemmas posed by “The Dark Knight,” both Oscar-winning movies.

I get where Scorsese is coming from. I wish there were more variety at modern multiplexes than the comic book movies, franchises and remakes that have gobbled up the marketplace. But if there’s anyone who personifies the grey area of 21st century cinema, it’s Scorsese. After all, Spielberg has gone on the record criticizing streaming services — specifically Netflix — for barging into the Oscars. “I don’t believe that films that are just given token qualifications, in a couple of theaters for less than a week, should qualify for the Academy Award nominations,” he said.

Now Scorsese is one of those supposed interlopers, though “The Irishman” will be getting almost a month of theatrical distribution instead of less than a week as has been the case in the past: it opens in theaters November 1 before its Netflix premiere on November 27. Nevertheless, most people who watch “The Irishman” will be watching it on their TVs, tablets or smartphones.

There’s no putting the genie back in the bottle. Just as new technology has made distributors like Netflix possible, Marvel has made superhero movies a dominant cultural force. Cinema as an art form itself is a little over a century old, so in the grand scheme of human artistic endeavors, it’s still pretty new. Perhaps Shakespeare would have thought all movies were just a theme park ride (though you’d first have to explain to him what a theme park is).

Culture and technology evolve, and these days they’re evolving rapidly. Spielberg and Scorsese have found great success in this particular art form at this particular time, but does that mean they should dictate which direction it goes in next? I’m just a moviegoer, but I think the dividing lines are becoming more and more arbitrary. Whether or not it fits your definition of “cinema,” they’re all similar forms of visual art, whether it’s “The Irishman” or “Iron Man” or “The Man in the High Castle.”

In another 100 years people may look back at this era and think we were drawing the wrong distinctions entirely. Whatever cinema is then, it may not be something that Spielberg, Scorsese or I even recognize. And that’s okay, because the hot takes of 2019 won’t matter to them then.

MAKE YOUR PREDICTION: What will win Best Picture?
To save your prediction, you must log in to Gold Derby. Click here to sign in with existing account -- or create a new one.
PREDICTthe Oscars now; change them until January 13