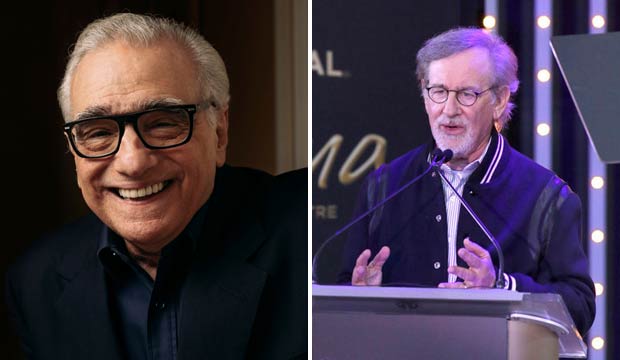 Scorsese recently said to Empire Magazine about Marvel movies, “Honestly, the closest I can think of them, as well made as they are, with actors doing the best they can under the circumstances, is theme parks. It isn’t the cinema of human beings trying to convey emotional, psychological experiences to another human being.” A little more than a third of our respondents (35%) agreed with him.

However, this is also an era when technological advancement has fundamentally changed the moviegoing experience, and Scorsese has embraced at least one such change: he made his critically lauded new film “The Irishman” for Netflix, which by Spielberg’s reasoning should qualify Scorsese for Emmys, not Oscars. Indeed, 11% of our readers told us that while Marvel movies are cinema, Netflix movies aren’t.

But the majority of our readers (54%) clapped back at both filmmakers. They said, “It’s all cinema, no matter where it comes from or what it’s about.” Full disclosure: that’s the option I voted for too. The technology and culture of storytelling keep changing, but that doesn’t make it better or worse, per se. In 10, 20 or 50 years what we think of as “cinema” might not be something that Spielberg or Scorsese even recognize. And that’s probably okay.

Also, while the overwhelming churn of franchise movies and sequels at the multiplex can feel oppressive, every once in a while that supposed non-cinema can deliver something truly unique and enlivening like a “Thor: Ragnarok” or a “Black Panther.” Whether it’s in a Marvel movie, or a Netflix movie, or from some other source or medium, to paraphrase a Spielberg movie, art finds a way. 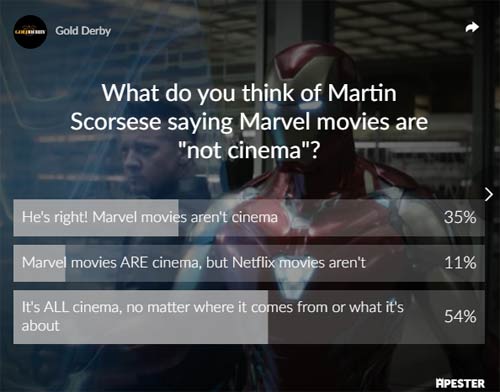 MAKE YOUR PREDICTION: What will win Best Picture?
To save your prediction, you must log in to Gold Derby. Click here to sign in with existing account -- or create a new one.
PREDICTthe Oscars now; change them until January 13