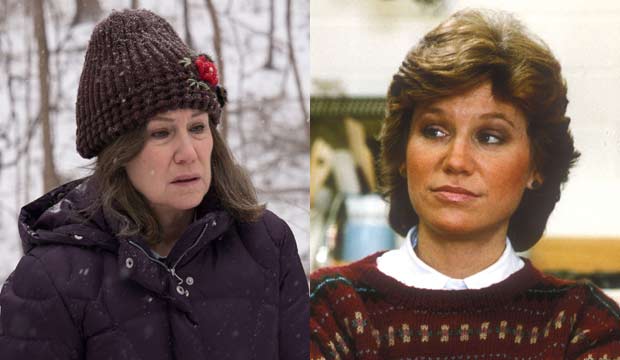 They say good things come to those who wait. We might be able to slot actress Mary Kay Place in that description, thanks to some surprising awards season attention from the Los Angeles Film Critics Association for her heartfelt performance in “Diane” as a deeply caring retired widow who can’t forgive herself for her past choices no matter how many casseroles she takes to those less fortunate than her.

The wintry working-class drama, a throwback to a time when  cinema celebrated relatable yet flawed characters, premiered at the 2018 Tribeca Film Festival — where it won three honors including Best Narrative Feature. Distributed by IFC, it opened without much fanfare in late March while managing to achieve a 93% positive score on Rotten Tomatoes. “Diane” is currently available for viewing on Hulu.

Perhaps most surprising for those who can recall Place’s breakout Emmy-winning role as country singer Loretta Haggers in Norman Lear‘s off-beat ’70s  TV soap opera “Mary Hartman, Mary Hartman?” This is the 72-year-old actress’s first-ever lead role on the big screen. It’s not unheard of that a left-field performance might be able to squeeze into the Oscar line-up. Back in 1987, Sally Kirkland found her way onto the Academy Award ballot for her lead role in “Anna” and won a Golden Globe for her dramatic role as a Czech actress after being lauded by the same L.A. film critics group.

In Place’s case, however, she would also finally catch up with her cast mates from “The Big Chill,” the ensemble classic whose other members have all managed to land in the Oscar race at some point.

Let’s switch on the wayback machine to 1983, when “The Big Chill” opened in the September of that year. Director and writer Lawrence Kasdan  basically concocted an irresistible siren call for nostalgic Baby Boomers as a gang of nine core actors — including one playing a corpse (Kevin Costner, whose face is never revealed) and a pretty 20-something girl (Meg Tilly) who represents the then-current generation — are brought together to pay their respects to their lost pal while rehashing their past entanglements when they were college students together 15 years earlier.

Seen today, this exercise in trying to revive one’s youthful past by swilling wine, jogging, puffing weed, philosophizing and reigniting amorous connections while grieving over the suicide of their former ’60s radical friend might feel a bit pat.  But its soundtrack stuffed with note-perfect hits by Smokey Robinson and the Miracles, Aretha Franklin, Procol Harum, the Young Rascals and Three Dog Night became a best-seller while a top-tier cast knew how to fill in the emotional blanks of their recognizable types.

Glenn Close would score the lone acting Oscar nomination for her supporting role, the second of seven career nominations so far. But almost all her co-stars would also earn Academy Award attention in the future as well. Tilly would be up for her supporting role in 1985’s “Agnes of God.” That same year, William Hurt won Best Actor for “Kiss of the Spider Woman” and received lead nominations for 1986’s “Children of a Lesser God” and 1987’s “Broadcast News” and a supporting nod  for 2005’s “A History of Violence.” Tom Berenger would compete as a supporting player for 1986’s Best Picture “Platoon.”

Kevin Kline won for his supporting role in the 1988 comedy “A Fish Called Wanda.” Directing live-action short films would shine Oscar attention on two other castmates, Jeff Goldblum (1995’s “Little Surprises”) and JoBeth Williams (1994’s “On Hope”). Meanwhile, the dead guy aka Costner out-did them all when he made his directing debut with 1990’s “Dances With Wolves,” a 12-time Oscar nominee that earned him a lead actor nomination as well as wins for Best Picture and director.

The chances that Place can find a place on the Oscar ballot are unlikely, but you never know. But why not reward yourself by seeking out “Diane.” You won’t regret it.