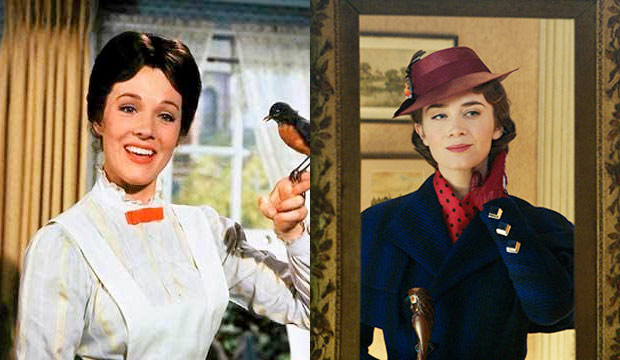 The screen version of the 1956 Broadway musical “My Fair Lady,” which had launched Andrews won all of those awards save for adapted screenplay which went to “Becket.” Jack Warner had spurned casting Andrews in the role of Eliza Doolittle, opting for Oscar winner Audrey Hepburn instead who ended up being snubbed by the actors branch of the academy.

Sequels rarely do as well as their original, particularly if the film is as iconic as “Mary Poppins.” Rob Marshall’s long-awaited sequel “Mary Poppins Returns” has earned Golden Globe and SAG  nominations for Marshall’s Mary, Emily Blunt, and Best Picture Comedy or Musical from the HFPA, too. Lin-Manuel Miranda also earned a Golden Globe nomination, for Best Actor in a Comedy or Musical.

How will it fare at the Academy Awards. Our current odds are predicting it will contend in these categories:

That’s a total of seven nominations, six less than its original managed. So how many of these seven races is “Mary Poppins Returns” expected to win? Alas, it’s predicted to go home empty-handed.The highest it climbs on our charts is third place in both Costume Design and Production Design. To quote Blunt’s Mary herself: can you imagine that?