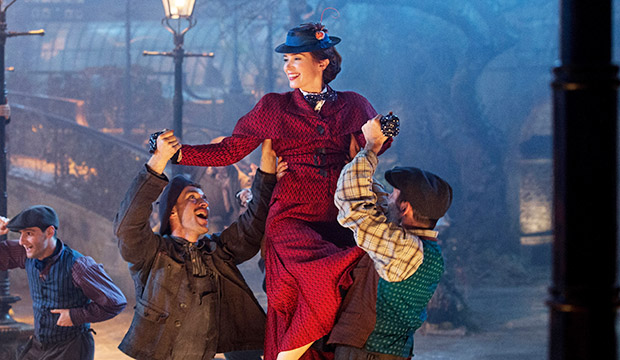 The title role brought Julie Andrews the Best Actress Oscar half a century ago, so Blunt had her work cut out for her. When Marshall called to offer her the part “the air changed in the room because you are just instantly bombarded by these thoughts of how iconic she is, and what she’s meant to me, to everybody, and the searing imprint she’s had on people’s lives.” Her gamble paid off with Golden Globe, SAG and Critics’ Choice nominations, which could lead to a career-first Academy Award bid.

Miranda plays Jack, a lamplighter who accompanies Mary and her charges on their adventures, but the actor-musician looked at this as more than just an opportunity to play a great part. “This was film school for me,” he admits. “I said, I don’t know how a sequel to ‘Mary Poppins’ is going to play, but I’m going to learn so much watching Rob Marshall direct, and I did.” The multi-talented star just needs an Oscar to complete his EGOT grand slam of showbiz awards, which could be within reach following his Golden Globe bid for Best Film Comedy/Musical Actor.

Mortimer remembers when Marshall first contacted her about the film. She recalls that it was a film “he felt was necessary in this moment that we’re in now. He wanted to bring back Mary Poppins as a sort of antidote” to our turbulent political times. For that reason, she was “totally swept up in the idea of” joining the cast as Jane Banks, who was a child in the original film.

Whishaw plays Jane’s brother Michael, but he had never done a musical before. However, he knew that Marshall would be “a brilliant guide through that.” The director “taught me a big lesson about not worrying” and guided the actor through the numbers even though he’s not a trained vocalist; he learned to “inhabit the song.” Whishaw has also been in the awards conversation this season for his work in the Amazon limited series “A Very English Scandal,” for which he has won a Golden Globe and a Critics’ Choice Award.

For Marshall, the road to “Mary Poppins Returns” began all the way back in 1964 when the original Disney classic was released. “It was the first film I saw as a child,” he explains. “It introduced me to this world of film in an incredible way.” Despite revisiting it several times, “I never quite imagined that it would fall in my lap as a sequel 54 years later.” Now the film could return him to the Oscar race for the first time since his feature film debut, “Chicago,” which brought him a Best Director nomination.

Writer Magee, himself an Oscar nominee for penning “Finding Neverland” and “Life of Pi,” set out to write a script “that continued the story of ‘Mary Poppins'” instead of trying to remake the original. Although there are elements incorporated from the first film, including characters and set pieces, “we wanted to be careful that it wasn’t taking advantage of the fact that there was a beloved film.” He didn’t want to lazily “wink and nudge and point to references from that original film” just for the sake of nostalgia.

Many of the film’s below-the-line talents are also academy favorites. Beebe won the Best Cinematography Oscar for Marshall’s “Memoirs of a Geisha,” and Smith was nominated for Best Film Editing for his work on “Captain Phillips.”

Click on any of the 9 names below to be taken to the full interview: