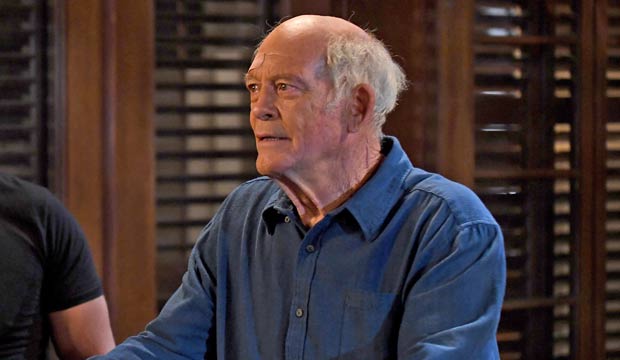 The role of Mike Corbin on “General Hospital” was played by Ron Hale for 16 years from 1995 until the actor retired in 2011. So when the character came back for a highly touted Alzheimer’s storyline in 2018 Hale was replaced by veteran character actor Max Gail. Now Gail is nominated for Best Supporting Actor at the Daytime Emmys, which marks the actor’s first bid at these awards and the first bid for any actor playing Mike. Gail also has a couple of Primetime Emmy nominations under his belt for his supporting performance in the comedy series “Barney Miller” (1979-1980). Will he finally take home the gold for the first time in his career?

The nominees and winners for the Daytime Emmys were determined based on sample performance reels from each actor, which were viewed and voted on by blue ribbon panels. Find out all about what Gail submitted to Emmy judges below.

Synopsis: The reel begins with Mike opening up to nurse Elizabeth Webber (Rebecca Herbst) about how scared he is about his Alzheimer’s diagnosis and about facing his son Sonny (Best Actor nominee Maurice Benard). Then we see Mike with Sonny and Carly (Best Actress nominee Laura Wright): Mike is determined to go back home to Brooklyn and accuses Sonny of always being embarrassed of him as a father. He says he’ll be fine living with Tammy, but Carly has to remind him that Tammy moved away years ago. Carly treats him delicately as his memories fail, and she takes the opportunity to ask Mike again to stay with them.

In the following scene Sonny present Mike with documents to sign that would give Sonny legal authority to make decisions on his behalf. Mike reacts angrily, but he has a heart-to-heart with Sonny, who asks Mike to trust him. After that is a frantic moment in which Mike is desperate to get back home to his parents, who are long dead; his grandson Michael (Chad Duell) talks him down and convinces him to stay.

Later, Mike overhears a conversation between Carly and Sonny about potentially sending him to a nursing home. Sonny wants him to stay, but Mike thinks it’s time to go. He’s coming to terms with a future where he forgets his family entirely, so he wants to leave while there are still good feelings and good memories left.

Pros: This is the longest reel in the category and focuses on a single storyline that allows Gail to explore a cohesive story arc around Mike’s illness. The actor chose savvy scenes that show a wide range of emotions: angry, frantic, desperate, afraid and reflective. He plays the character when he’s lucid and in moments when he experiences the advancing symptoms of Alzheimer’s. Gail’s performance runs the gamut, and this was one of the highest profile storylines on any soap in 2018, so voters may be eager to reward Gail for it. It doesn’t hurt that Gail also has a good scene on his fellow nominee Dominic Zamprogna‘s reel.

Cons: Marla Adams was nominated for an Alzheimer’s storyline on “The Young and the Restless” in 2018, but didn’t win, so portraying the illness isn’t a guaranteed path to an Emmy. Also, most of these scenes take place in the same house with most of the same characters, so perhaps voters will find it repetitive.