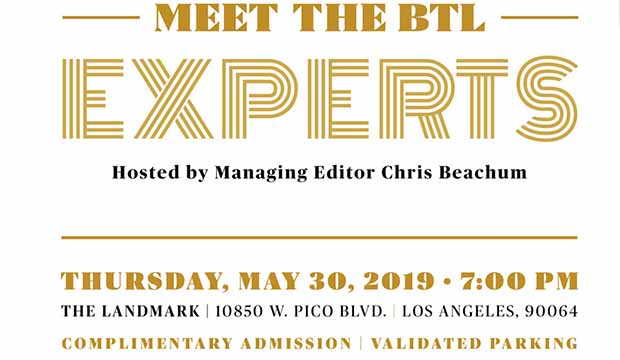 You are invited to attend our Q&A discussion with four of TV’s top cinematographers who now compete for Emmys. Join us on Thursday, May 30, at 7 p.m. at the Landmark Theater at 10850 W. Pico Blvd. in Los Angeles. Admission and parking are free. TV Academy and guild members will get priority seating.

GARY BAUM represents Universal Television for “Will and Grace”

Baum is the reigning Emmy Awards champion for Best Cinematography for a Multi-Camera Series. He won for “Will and Grace” in 2018 plus for “Mike and Molly” in 2015. His seven other nominations have been for “Gary Unmarried,” “2 Broke Girls,” “Mike and Molly” (3 others), “The Millers” and “Superior Donuts.”

Correia has had a busy season with DP work on both “GLOW” and the new comedy “Ramy.” Other recent series have included “Small Miracles,” “Deadbeat,” “Nightcap,” “Play by Play,” and the upcoming “American Princess.”

Libatique received his second Oscar nomination this year for “A Star is Born,” following his prior bid for “Black Swan.” Some of his other impressive films have included “Requiem for a Dream,” “Gothika,” “Iron Man,” “Noah” and “Straight Outta Compton.”