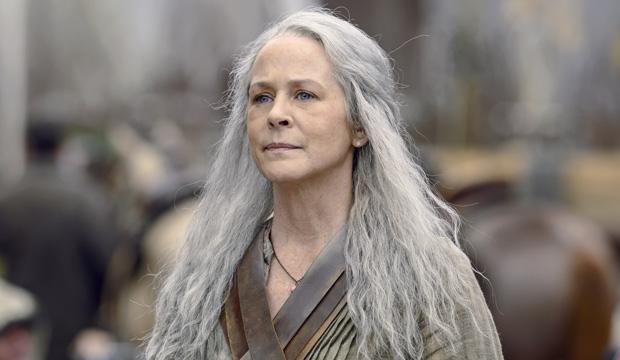 “How much more can she take?” wondered Melissa McBride after her character Carol lost yet another child on AMC’s “The Walking Dead.” McBride recently sat down with “Talking Dead” host Chris Hardwick to address the shocking death of Henry (Matt Lintz) in the penultimate episode of Season 9, years after losing her daughter Sophia (Madison Lintz) in Season 2. “Aside from just being sad that Matt Lintz was going to be leaving, I just thought it was interesting for the character of Carol. Again, here we go.” She then turned to showrunner Angela Kang and proclaimed, “Stop it — please!”

Leading up to the TV show’s version of the infamous pike deaths from the graphic novels, McBride recalled that her on-screen husband Khary Payton, who portrays King Ezekiel, was worried he might be on the chopping block. “I knew that Matt might be one of the people on the spike, and then there was Khary who was wondering if he might be on there,” McBride explained in the interview. “I was like, ‘You know, I’ve been giving it some thought and I think you’re safe.’ This was the day before the script had come out. And then I got the script and I’m reading the script the next day, and then Lydia comes running to the King and I’m like, ‘Oh gosh, oh no!’ What if I was wrong? What if I assured Khary he was fine and then his head’s gonna be on the pike?”

Luckily for Payton, the King survived Alpha’s (Samantha Morton) bloody massacre. Instead, the 10 characters whose heads were placed on pikes to mark the border between the Whisperers and the Kingdom were Ozzy, Alek, Frankie, DJ, Tammy Rose, Addy, Rodney, Enid, Tara and Henry.

SEE Thanks to Samantha Morton’s Alpha, ‘The Walking Dead’ could finally bite into a major category at Emmys

“It’s one thing for me to know what’s gonna happen in the script and it’s another thing to shoot what actually happens in the script,” McBride said about the emotion she experienced playing a character who lost a child. “That was devastating for the character. I can’t wait to find out what this is gonna do to her. It obviously has plunged her and the King into a terrible grief. Obviously there’s a lot of tension, the blame game, not knowing what we could have done to make this not happen. But I’m very excited to see how this is going to affect her in the next season.”

When Hardwick remarked that Carol seemed to be coping with Henry’s death in the Season 9 finale, she fired back, “I don’t want her to be okay. There are some things she can be okay with, but some thing is gonna happen.” Find out how Carol continues dealing with the loss of Henry when “The Walking Dead” Season 10 debuts in the Fall of 2019.