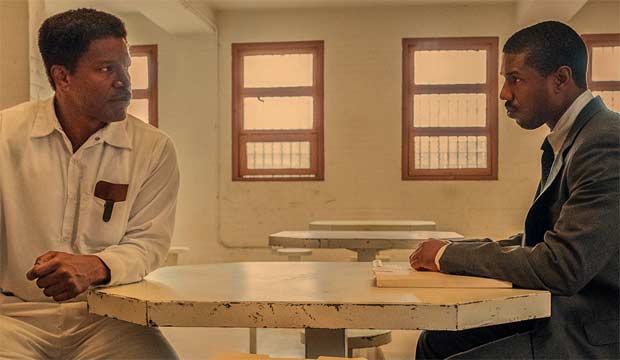 Destin Daniel Cretton‘s “Just Mercy” is a thought-provoking legal drama about renowned civil rights defense attorney Bryan Stevenson‘s efforts to free Walter McMillian, a condemned death row prisoner. It is a showcase for Michael B. Jordan and Oscar-winner Jamie Foxx in these respective roles. This Warners release, due out at Christmas, screened as part of the BFI London Film Festival.

Jordan, who was so boisterous and bombastic in last year’s “Black Panther,” leaves all of that behind in a mature performance. He strips back all of his effortless charm (but still maintains his natural likeability) to give a performance that is, like his character, all about getting the job done.

It’s not a showy role; there’s only one scene where he allows his emotions to show, and even that is restrained. But this stylistic choice serves the film well. It may not naturally draw the attention of awards groups who typically love a scenery-chewer, but Jordan deserves credit for delivering such a mature performance as Stevenson. One is reminded of the work of Gregory Peck in his Oscar-winning turn in “To Kill a Mockingbird.”

Foxx, who won the Best Actor Oscars for 2005’s “Ray, shines here in a supporting role. He gets to rage and scream, simmer with anger and get teary-eyed at seeing his family in court.  As with Jordan, Foxx’s natural charm makes you root for his character and become emotionally invested.

Brie Larson reunites with Cretton, who wrote and directed the film that launched her career, “Short Term 12.” She portrays Eva Ansley, a local who has signed on as his paralegal and lets her boss move into and work out of her home, sharing workspace with her son’s toys.

As with Foxx, the academy often rewards stars who shine in featured roles. Robert De Niro was nominated for “Silver Linings Playbook” in 2013, while Matt Damon earned a bid for “Invictus” in 2010. Similarly, Robert Downey Jr. earned a nomination for 2009’s “Tropic Thunder,” Eddie Murphy received a bid for 2007’s “Dreamgirls,” and George Clooney won for 2006’s “Syriana.”

Tim Blake Nelson is a scene-stealer, delivering a complex performance as Ralph Myers, a criminal for whom you can’t help but sympathize. This veteran actor, 55, has yet to be nominated by a major awards group. But he is decades younger than many first-time nominees. Christopher Plummer received his first Oscar nomination at age 81 for 2010’s “The Last Station”  while Hal Holbrook was 82 when he contended in 2008 for Supporting Actor for “Into the Wild.” Emmanuelle Riva was 85 when she reaped her Best Actress bid for “Amour,” while Gloria Stuart received her sole Oscar nomination (Supporting Actress) in 1998 for “Titanic,” when she was 87.