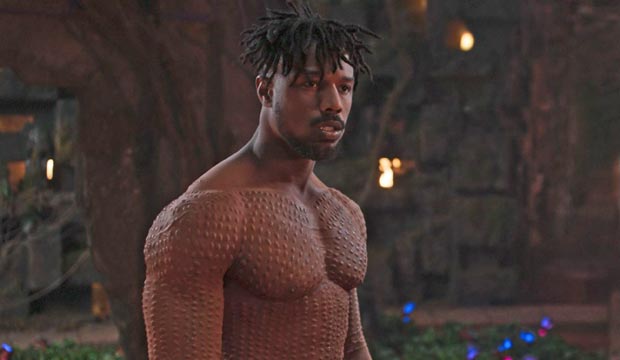 An overwhelming majority of “Black Panther” fans think that of the seven supporting actors in the cast, Michael B. Jordan is most deserving of an Oscar nomination. He racked up a whopping 85% of the vote in our recent poll, while none of the other six names merited more than 4% of the total tally. If you haven’t cast your ballot yet, do so at the bottom of this post.

Sterling K. Brown and Forest Whittaker received just that – 4% – while Andy Serkis, Martin Freeman, and Daniel Kaluuya each managed a meager 2%. Winston Duke, who stars in Jordan Peele‘s upcoming horror “Us” with “Black Panther” co-star Lupita Nyong’o, placed last in our poll with only 1% of readers selecting him.

It’s no surprise that Jordan has won by such a landslide victory – he received a Critics Choice nomination for his role as Erik ‘Killmonger’ Stevens/N’Jadaka – the cousin of Chadwick Boseman’s T’Challa/Black Panther. Jordan is the primary villain of the piece and so gets a lot of juicy screen time.

Killmonger’s style – costume, hair, make-up – is immediately iconic and he is one of the best-written villains in the MCU with a motive that makes sense, is intriguing, not entirely evil for the sake of being evil, and is entrenched in character. Jordan’s performance is full of swagger, bringing the character to life in a very appealing, charismatic way.

It’s also no surprise that Golden Globe winner Brown (Best Actor in a Drama Series for “This Is Us”) and Oscar-winner Whittaker (Best Actor for “The Last King of Scotland” in 2007) placed joint second.

Brown, who also won an Emmy for “This Is Us” plus another for “American Crime Story,” may not have the largest of roles in terms of screen time, but he does have one of the most significant roles as Killmonger’s father, N’Jobu. Brown makes a clear impression in the few scenes he has and is extremely important to the story – really fuelling the more emotional aspects of the story, particularly in Killmonger’s backstory and motives. Voters aren’t against nominating performers with little screen time if the role is important – just look at Ruby Dee earning a Best Supporting Actress bid for “American Gangster” (2008) for playing the crucial, emotional role of Denzel Washington’s character’s mother and having only 10 minutes of screen time.

Whitaker plays Zuri, an elder statesman in Wakanda and the keeper of the heart-shaped herb, which gives Black Panther his powers. Zuri also becomes a large plot point and another emotional climax of the film, which helps Whitaker stand out in the movie. Coogler also compared Zuri to Obi-Wan Kenobi in “A New Hope,” an older, wiser, spiritual figure who guides a younger hero. This comparison can only help; Alec Guinness was nominated for Best Supporting Actor for playing Kenobi in 1978.

Meanwhile, Serkis is the wonderfully named Ulysses Klaue, a South-African black market arms dealer who is allied with Killmonger. Serkis, who first portrayed the character in “Age of Ultron” utilizes a great South-African accent and gives probably the most colorful performance on this list. Emmy winner Martin Freeman (“Sherlock”) is Everett Ross, a CIA agent who ends up in Wakanda. Freeman first appeared as this character in “Civil War” but in “Black Panther,” he has more screen time and more importance to the plot.

The Oscar-nominated Kaluuya (“Get Out”) plays W’Kabi, T’Challa’s friend and head of security for the Border Tribe. Kaluuya’s character is a conflicted one and he goes on an internal journey throughout the film, making him one of the more standout performers acting-wise on this list. Duke plays M’Baku, a ruthless warrior and leader of the Jabari, Wakanda’s mountain tribe. Again, M’Baku goes on a very personal journey through the film and his narrative is a conflicted one.

Still, Jordan reigns supreme, as his character did briefly in Wakanda, as the actor most deserving of a Best Supporting Actor nomination. But what do you think? Jordan is the obvious choice, but is the most deserving? Let us know what you think.