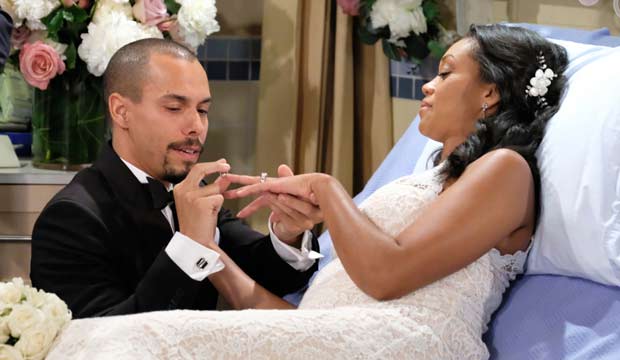 Mishael Morgan left “The Young and the Restless” in 2018 after a five-year run on the CBS soap as Hilary Curtis, but she has gotten a nice parting gift from the Daytime Emmys: her second straight nomination for Best Supporting Actress. Can she win for her farewell storyline?

The Daytime Emmy nominees and winners were decided in a single blue ribbon voting round in which academy members viewed sample performance reels from each actor. In recent years those reels were made available to the public, but this time only the press were granted access to the nominated material. So find out all about Morgan’s reel below.

Synopsis: This reel consists entirely of hospital scenes as Hilary is on her deathbed following a car accident. The first scene is between Hilary and Phyllis (Gina Tognoni): Hilary wants to know the truth about her condition, and Phyllis reluctantly admits that the doctors expect her to die from her injuries. Hilary cries over all the experiences she’ll miss out on with the man she loves, Devon (Best Supporting Actor nominee Bryton James). In the next scene she comes to terms with Neil (Kristoff St. John), who is Devon’s father but also Hilary’s ex.

But most of the reel features Hilary’s scenes with Devon, whom she chose to marry right there in the hospital before her death. Together they imagine the future they will never have, and Hilary explains that she wants her funeral service to be a celebration. She also asks that Devon move from her on so that he can find love again. She gradually weakens in his arms before finally dying from her injuries.

Pros: These are deeply moving scenes that give Morgan a complete emotional arc to play as Hilary learns of her impending death, mourns the life she’ll never have but ultimately comes to accept her fate and succumbs to her injuries while lying with her husband. Morgan is especially impactful at the start of the reel when Hilary is devastated to learn the bad news from Phyllis. And this storyline clearly went over well with voters since a couple of these scenes are also included on the reel that earned James his nomination.

Cons: Since these scenes take place entirely at Hilary’s bedside, Morgan doesn’t have as much opportunity to demonstrate a wide range of emotions like voters are often looking for. And as Hillary becomes weaker towards the end of her scenes, the reel becomes more a showcase for James as her grieving husband.