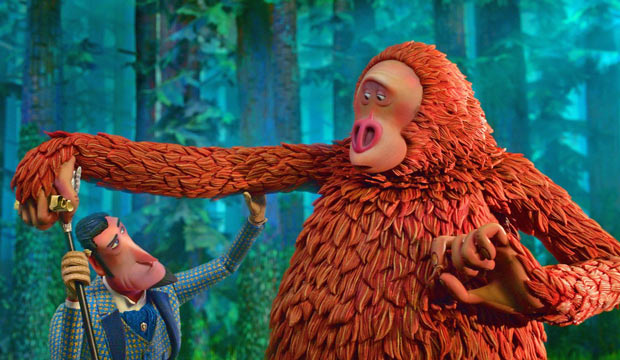 In the film directed by Chris Butler, Mr. Link (Zach Galifianakis) is an eight-foot-tall creature covered in fur who is tired of living a solitary life in the Pacific Northwest. He recruits fearless explorer Sir Lionel Frost (Hugh Jackman) to guide him on a journey to find his long-lost relatives in the fabled valley of Shangri-La. Along with adventurer Adelina Fortnight (Zoe Saldana), the trio encounters their fair share of peril as they travel to the far reaches of the world. Through it all, they learn that sometimes one can find a family in the places one least expects.

Critics agree that Laika’s latest stop-motion animated feature is worthy of Oscar recognition. David Sims (The Atlantic) found it to be “a sweet-hearted narrative of how friendship can broaden one’s horizons.” Meanwhile, Joel Mayward (Cinemayward) called the movie “an underrated delightful romp.”

In 2009, Laika first came onto the scene with an adaptation of Neil Gaiman’s 2002 novel, “Coraline.” Yet, despite receiving strong buzz very early on in the year, the film ended up losing the Oscar to Disney/Pixar’s “Up,” which also had the momentum of being a Best Picture nominee. In 2012, Laika was back in the Oscar race with “ParaNorman,” but ended up losing to Disney/Pixar’s “Brave.” In 2014, they had “The Boxtrolls,” but lost to Disney’s “Big Hero 6.” In 2016, Laika released “Kubo and the Two Strings” to strong critical acclaim. Despite becoming the second animated film to score an Oscar nomination for Best Visual Effects following 1993’s “The Nightmare Before Christmas” and even winning the BAFTA for Best Animated Feature, it ended up losing the Academy Award to Disney’s “Zootopia.”

As of this writing, “Toy Story 4” is leading Gold Derby’s Oscar predictions with 82/25 odds to win Best Animated Feature. In second place is “Frozen II” with 4/1 odds. In third place is “How to Train Your Dragon: The Hidden World” with 5/1 odds. Meanwhile, “Missing Link” is currently in fifth place with 19/2 odds, behind “Abominable” with 8/1 odds.

However, what may bode well for “Missing Link” is that to date, “Toy Story 3” (which also had a Best Picture nomination) is the only sequel to have won the Oscar for Best Animated Feature. As of now, no franchise has ever won the award twice, which may not end up being good news for “Toy Story 4” nor “Frozen II.” So could “Missing Link” sneak in and win the Oscar this year? Or will Laika continue to be always the bridesmaid, never the bride?