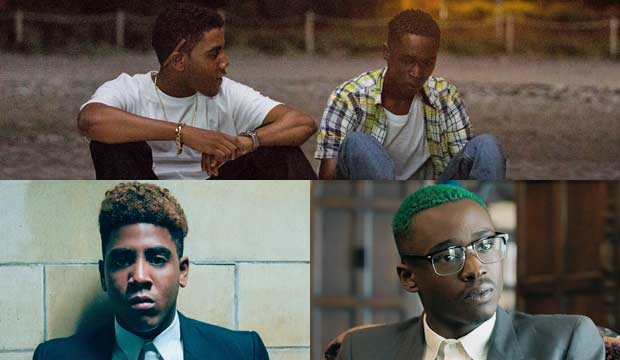 “Moonlight” was a breakthrough for many careers, including for the film’s young actors. And this year we could see that manifest at the Emmys, where Ashton Sanders and Jharrel Jerome may go from playing Chiron and Kevin in the Oscar-winning film to being rivals for Best Movie/Mini Actor on the small screen.

Directed by Barry Jenkins, “Moonlight” told the story of a young man coming to terms with his sexuality, and it was divided into three parts. Sanders and Jerome starred in the middle segment in which their characters were teenagers and discovered their attraction to each other. They even won Best Kiss at the MTV Movie and TV Awards for their romantic moment.

This year Sanders starred in “Native Son,” a modern update of the landmark 1940 novel by Richard Wright. The film premiered at Sundance in January and then aired on HBO on April 6. Sanders plays Bigger Thomas, a young man in Chicago whose life turns upside down after he takes a job as a driver for a wealthy family. Michael Philllips (Chicago Tribune) wrote that Sanders is the “best thing” about the film, while Owen Gleiberman (Variety) called his performance “poetic.”

Meanwhile, Jerome will be starring in Ava DuVernay‘s Netflix limited series “When They See Us” as Korey Wise, one of the real-life young men known as the Central Park Five, who were wrongly convicted of rape in New York City. The series doesn’t premiere on the streaming service until May 31, but DuVernay is already a proven Emmy contender after winning twice for her documentary “13th.” Also, Netflix has quickly been making inroads in the long form categories with two Best TV Movie wins for “Black Mirror” (2017-2018) and a Best Limited Series bid for “Godless” (2018). and Netflix is heavily promoting the limited series, showcasing it during their FYSEE campaign.

So could the two “Moonlight” alums find themselves back in the awards spotlight together?