Adorable puppies, cryotherapy facials and Morgan Freeman — NatGeo pulled out all the stops to court Emmy voters at its ambitious multimedia Contenders Showcase, a For Your Exploration event held on June 2 outside the Greek Theater in Los Angeles.

Fans of “Free Solo” rock climber Alex Honnold lined up to shake the calloused hand of the real-life daredevil and have their free copies of his memoir adorned with his autograph. His film and sound editors hosted guests nearby with miniature post-production simulations, while co-directors E. Chai Vasarhelyi and Jimmy Chin posed for selfies.

“Life Below Zero” froze faces with edible snow cones and a cryotherapy facial station in which guests laid down and closed their eyes as they braced for concentrated streams of vaporized liquid nitrogen. The glacial facials had the makings of Hollywood’s next anti-aging fad.

“Hostile Planet” featured furry animals and an eye-popping VR experience. Some attendees got a tattoo from henna artists and created their own religious charm while chatting with producers of “The Story of God.”

Humbled and superstitious at the mention of his imminent 18th Emmy nomination, “The Hot Zone” composer Sean Callery guided scores of aspiring and formerly-aspiring musicians as they banged on retro drum machines hooked up to live-composition software that overlaid their beats immediately over clips from the Ebola docudrama, which was touted on stage as the network’s most-watched scripted series ever.

Oscar winner Morgan Freeman kicked off the ceremony by introducing a trailer for the third season of “The Story of God with Morgan Freeman,” then Emmy winner Julianna Margulies appeared via prerecorded video to introduce a trailer for “The Hot Zone” and supporting actors apologetic for not being Bradley Whitford introduced a “Valley of the Boom” trailer.

The main event culminated in a concert playing over heart-stopping scenes on screen from “The Flood” (introduced via video by narrator Angela Bassett), “Free Solo” and “Hostile Planet.” The emphasis on music was a savvy response to how the Emmys revamped the relevant races this year, both with the addition of a dedicated Best Documentary Music category and the switch to music nominations being decided through broad-based popularity as opposed to equitable judging panels. An appreciation for the score by Golden Globe nominee Benjamin Wallfisch was undoubtedly what some guests took home with them from “Hostile Planet,” but others might have literally taken home rescued puppies that the nonfiction nature miniseries brought out, ready for adoption. Some guests might not remember anything about dogs or music; there was an open bar, after all, plus Beyond Burgers and Churros.

SEEour interview with Julianna Margulies about “The Hot Zone.”

Make your Emmy predictions today so that Hollywood insiders can see how their shows and performers are faring in our odds. You can keep changing your predictions as often as you like until the nominations announcement on July 16. And join in the debate taking place right now with Hollywood insiders in our television forum. Subscribe to our podcasts at either Google Play, iTunes, Libsyn, Spotify or Stitcher.

Behind the scenes at NatGeo's Emmy FYC extravaganza 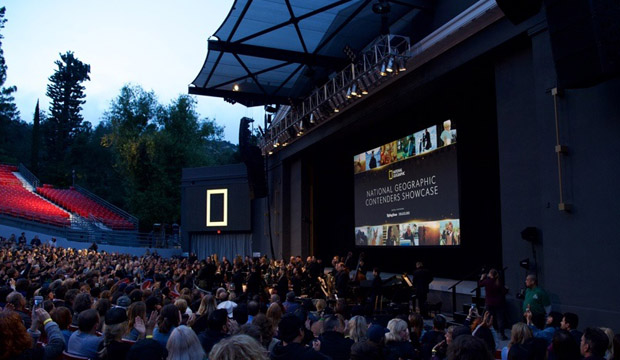