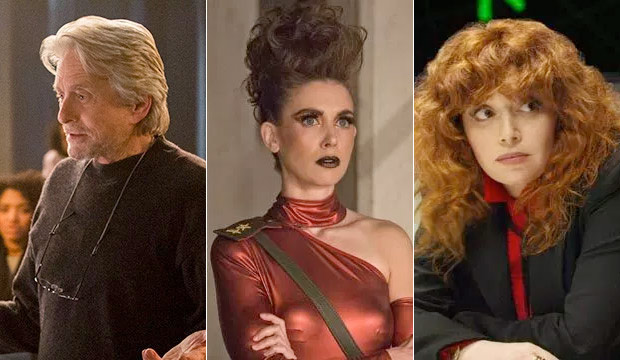 According to Gold Derby’s combined Emmy predictions, this year’s seven nominees for Best Comedy Series will be “Veep” (5/1 racetrack odds), “The Marvelous Mrs. Maisel” (6/1), “Barry” (6/1), “The Kominsky Method” (15/2), “The Good Place” (9/1), “GLOW” (11/1) and “Russian Doll” (12/1). Notice anything slightly streamy about this list of contenders? That’s right — a whopping three of them come from Netflix. In recent years the streaming giant has had two shows represented in this comedy category (“Master of None” and “Unbreakable Kimmy Schmidt” in 2016 and 2017, “Kimmy” and “GLOW” in 2018), but they could very well top themselves this year with a whopping three nominees.

“The Kominsky Method” seems to have the best chance at Emmy love thanks to all of the awards support it earned earlier this year. The show about an aging actor who becomes a teacher took home two Golden Globes for Best Comedy Series and Best Comedy Actor (Michael Douglas). It also earned a trio of nominations at the SAG Awards for its ensemble cast and male actors Douglas and Alan Arkin, and then was feted by the AFI Awards as one of the Top 10 TV shows of the year.

When showrunner Chuck Lorre, a television veteran who’s produced everything from “Roseanne” to “The Big Bang Theory,” accepted his Golden Globe for “The Kominsky Method,” he joked at the podium, “This doesn’t happen to me.” It’s true — even though Lorre is a household name he’s been strangely overlooked at awards shows throughout his career. Might he finally walk off with his first Emmy for his new Netflix laffer?

After receiving a nomination last year in Best Comedy Series, “GLOW” is hoping to make it a repeat for Season 2. This 1980s female wrestling comedy led by Alison Brie earned 10 nominations last year, including for director Jesse Peretz and supporting actress Betty Gilpin, winning for its stunts and production design. In its second season the show is more popular than ever and has key support from all aspects of the television industry, earning precursor nominations at the SAG Awards, ACE Eddies, Art Directors Guild, Costume Designers Guild, Makeup and Hair Guild, Writers Guild and PGA Awards.

“Russian Doll,” which dropped in February, is one of Netflix’s newer offerings but it’s already been recognized at the TCA Awards with a leading four bids. Now Gold Derby’s Experts, Editors and Users think it will get into Best Comedy Series and Best Comedy Actress (Natasha Lyonne). Lyonne co-created, stars in, writes, produces and directs this series about a woman who repeatedly dies and then wakes up at her birthday party. Multi-hyphenates are often recognized at the Emmys for their hard work — just look at recent faves like Tina Fey (“30 Rock”), Lena Dunham (“Girls”) and Aziz Ansari (“Master of None”).

Other potential Netflix comedies hoping for some Emmy attention include “Unbreakable Kimmy Schmidt,” “Dead to Me,” “Grace and Frankie,” “One Day at a Time,” “Arrested Development” and “After Life.” See more Emmy odds and rankings. Just last year HBO earned bragging rights by having three comedies nominated: “Barry,” “Curb Your Enthusiasm” and “Silicon Valley.” Will Netflix be next?