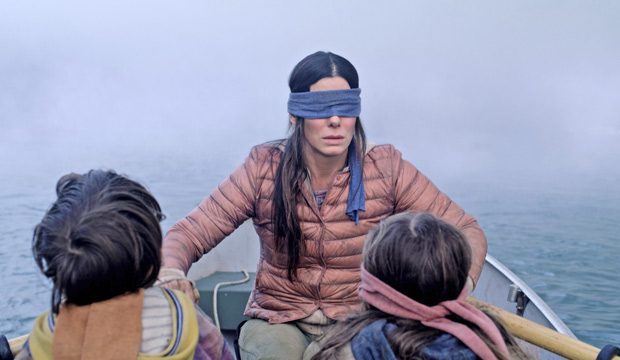 Even though Netflix isn’t staging a massive awards campaign for its horror sensation “Bird Box,” the original movie is still eligible at the 2019 Oscars. Days ago the academy announced that a record 347 films were eligible for this year’s kudos and “Bird Box” was listed among them. (See the complete list.) Starring Sandra Bullock as a woman who survives an apocalypse in which millions of people commit mass suicide, the film is taking the internet by storm. In fact, Netflix even brags that a whopping 45 million accounts streamed “Bird Box” in the first 7 days.

Similar to Paramount’s “A Quiet Place,” the key to survival in “Bird Box” is to limit one of your senses. In “A Quiet Place,” which is getting major Oscar buzz, the protagonists must stay silent in order to avoid being eaten by sound-hunting monsters. In “Bird Box,” a supernatural force can only make you kill yourself if you see it, so the characters hide under blankets or wear blindfolds. It’s the stuff of countless internet memes, of course.

“Bird Box” was released in limited theaters for a qualifying run on December 14, then it began streaming on Netflix on December 21. The film received a 66% score on Rotten Tomatoes, with Richard Roeper (Chicago Sun-Times) raving, “[It’s] great, shudder-inducing stuff,” and Justin Chang (Los Angeles Times) remarking, “You’ve seen this all many times before, which doesn’t mean you’ll mind seeing it again.”

When the Oscar nominations are announced January 22, don’t expect to see “Bird Box” or Bullock among the nominees since Netflix didn’t go overboard in their awards campaign. Instead, the streaming service put much of their focus on “Roma,” Alfonso Cuaron‘s semi-autobiographical tale that’s now a major Oscar contender in several categories including Best Picture, Best Director and Best Actress (Yalitza Aparicio).